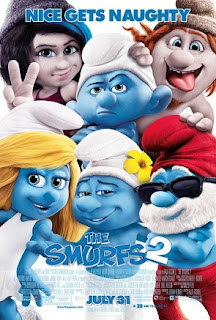 Dastardly Gargamel (Hank Azaria) has been living the high life since his undoing in 2011’s SMURFS.  Between upscale magic shows in Paris with his feisty feline, Azrael, the warty wizard spawns a pair of Smurf-like creatures in hopes of harvesting their “essence” to sustain his evil energy.

The grey-skinned knockoffs—Vexy (Christina Ricci) and her brother, Hackus (J.B. Smoove)—don’t pack half the essence of the genuine article, leaving Gargamel disappointed and desperate.  So he tasks the two “Naughties” with kidnapping Smurfette (Katy Perry), who’s practically bubbling over with Smurf essence—and just happens to know the secret formula for concocting endless batches of the stuff.

The blonde Smurf princess is abducted at the worst time ever:  It’s Smurfette’s birthday, and though hundreds of Smurfs have bustled about their toadstool town preparing a surprise bash, they don’t get a chance to spring it on her.  By the time she’s sucked through a portal into the human world (again) she thinks everyone’s forgotten her special day, and that maybe she didn’t belong with the Smurfs in the first place.  The vulnerable, forlorn Smurfette finds she has a lot in common with her Naughties captors.  After all, she was made by Gargamel, too.

Papa Smurf (the late Jonathan Winters) assembles a team to venture into the human world and rescue Smurfette, but a last-minute gaff results in the B-Team of Clumsy (Anton Yelchin), Grouchy (George Lopez), and Vanity (John Oliver) being fed teleportation crystals instead of go-to troopers Brainy, Hefty, and Gutsy.  And instead of arriving in Paris—where Gargamel has Smurfette imprisoned—the rescuers pop up in New York (again), at the apartment of human friends Patrick and Grace Winslow (Neil Patrick Harris and Jayma Mays).  Which means they’ve all got to hop a red-eye to the City of Lights.

Why not simply “set” the crystals for Paris?  And if the destination can’t be set, how is it the Smurfs conveniently end up at—of all places—their old pals’ address?  How does Patrick smuggle his Smurf cargo past airport security?  No matter.  The NYC layover serves the plot by (messily) reuniting the Smurfs with Mr. and Mrs. Doogie Howser (and introducing their toddler son, Blue).  Patrick’s overbearing, corndog-shilling stepfather Victor Doyle (Brendan Gleeson) also signs on, much to Patrick’s chagrin, their sour relationship becoming a running parallel for Smurfette’s (mistaken) sense of betrayal by Papa and her blue brothers.

The Naughties—riot grrrl Vexie and lovable (if dim-witted) Hacksum—befriend Smurfette to appease Gargamel and win the daily dose of essence they need to survive.  But they’re expendable assets for the self-serving sorcerer, who plans to extract essence from all the Smurfs and use the aggregated power to (yawn) rule the world.  Patrick, Papa, and the gang must race to save their sister Smurf, convince her she’s truly part of the family (despite her origins), and stop Gargamel from enslaving all of Smurf Village—and humanity along with it.  Grouchy puts a positive spin on things for a change, and even narcissistic Vanity proves invaluable.  New recruits include Party Planner Smurf, Social Media Smurf, and (no, we’re not kidding) Passive-Aggressive Smurf.

Kids’ director Raja Gosnell (BEVERLY HILLS CHIHUAHUA, SCOOBY-DOO) returns, seamlessly blending his live action people and places with the animation team’s computer-generated critters.  We’ve enjoyed this mishmash movie technology for over twenty years now, but we’re still impressed by CGI artists’ attention to detail when rendering half-pint heroes like Peyo’s little people: The eyes and hair (the females, anyway—and Papa’s beard) look authentic, and sometimes you actually see texture in the fabric of the Smurf’s pants and stocking caps.  When Smurfette and the Naughties ransack a French candy store and enjoy a getaway flight on a pair of swans, corresponding shadows flit across the cathedral façades.  When Vanity and Grouchy emerge from baths in the sink, water glistens realistically on their azure skin.  And when Victor is transformed into a feisty fowl, his duck bill flaps in synch with his dialogue.  Likewise, Azrael the Cat mewls in conversation with Gargamel—and is put through quite a few paces for a pixilated puss.

Maybe we’re easily amused.  But we were raised on pen-and-ink TV animals like Tom and Jerry, Yogi Bear, Garfield, and Underdog and (schlocky scripts aside) don’t take for granted the time and effort required to make it seem as if these creatures inhabit our world.  We only wish today’s young audiences appreciated it, too.  Moreover, it must take something extra for actors (who deserve better) like Harris and Azaria to camp it up for green screens and intermingle with costars who aren’t really there.

Patrick comes to appreciate Victor’s unconditional love as Smurfette slowly realizes she’s been duped, and that Papa Smurf and the gang miss her and will stop at nothing to bring her home.  Yes, children, the true essence of SMURFS 2 is fatherhood, and stepdads (and sibling) finally receive their dues in this age of the non-nuclear family.  Or, as Papa Smurf so eloquently opines:

“It’s not where you come from that matters, it’s who you choose to be.”

It’s just a shame the film itself is so pedestrian.  Sure, kids under 8 will delight in creepy Gargamel’s prosthetic proboscis and gnarly teeth, Azrael’s antics, Smurfette’s runaway Ferris Wheel, Grouchy’s temper tantrums, and Vanity’s smarmy quips—but parents could turn blue enduring more than 90 minutes of this, even with grown-up references like Mays’ turn channeling Hepburn from BREAKFAST AT TIFFANY’S.

Note the ham-fisted product placements by the Hotel Celeste, Nutella, and Sony (hey, it’s their movie—why not hawk the new Xperia tablet?).  2 out of 4 stars.