The Sandlot's 20th-anniversary tour - with the original filmmaker - slides into town on July 12. 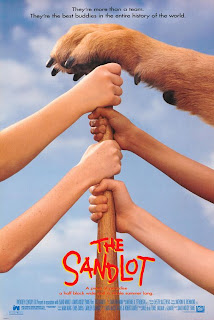 What important thing happened 20 years ago? Oh, besides the last known time someone in Cleveland actually found a job? It was the premiere of THE SANDLOT, the family comedy that brought to amateur baseball the same effortlessly entertaining vibe that A CHRISTMAS STORY did for Noel. This summer, to coincide with the DVD/Blu Ray anniversary edition of the Fox release, writer-director-narrator David Mickey Evans is touring with the film and meeting fans.

Evans will visit Classic Park, home of the Lake County Captains, on Friday, July 12, for a fan meet-and-greet and a screening of the movie (now rated G by the MPAA; the original cut was PG).

Set in 1962, 1993’s THE SANDLOT was based on Evans’ childhood memories and was deliberately cast with young unknowns (though grownup actors Denis Leary, James Earl Jones and Karen Allen had nice supporting turns). The plot has non-athlete kid Scotty uprooted by his mother's remarriage and relocated to a California town where he befriends local boys playing casually in a vacant lot adjacent to a junkyard - a junkyard wherein a legendary monster guard dog, "the Beast" (cleverly glimpsed in bits and pieces as a horrific menace in outsized-creature puppetry) has a habit of intercepting and hoarding fouls over the fence.

When Scotty loses his feared stepfather's prized possession, an autographed baseball, in the Beast’s territory, the kids have to face down the Godzilla-like canine – and its surprising owner.

There were two less-regarded sequels for the home-video market, that took on sandlot baseball in different era (once using a time-travel gimmick), but this SANDLOT made its mark with fans of all ages. Amazing Fun Fact: THE SANDLOT also set a fair-use legal precedent - when Evans' childhood buddies sued him for creating fictitious characters based on them without permission. California courts upheld the filmmaker’s right to dramatic license. Without which, well, Truman Capote’s estate may well have sued Harper Lee for To Kill a Mockingbird, Anna Vintour could take revenge for THE DEVIL WEARS PRADA, Bill and Hillary Clinton could collect damages for PRIMARY COLORS and that’s just for starters. Dodged a beanball there, we all did.

Evans will be meeting fans and signing autographs on the concourse from 5:30 p.m. until 7:30 p.m., host a film-trivia contest for a half-hour, then continue to meet the public from 8 p.m. until 10 p.m. Fans can play catch, take advantage of the kids’ playground, and enjoy refreshments at the concessions stand.

The SANDLOT 20th-anniversary party and screening costs $7 in advance to attend or $10 at the door. Tickets are available at the Captains website at www.CaptainsBaseball.com, the Classic Park Box Office or by phone at 440-954-WINS (9467). And if you can’t make it that day, but you’d drive clear to Michigan to see THE SANDLOT, know that the tour appears in Toledo on July 5. For tour details, go to the filmmaker’s blog http://davidmickeyevansblog.blogspot.com/
Posted by Charles Cassady Jr. at 12:00 AM