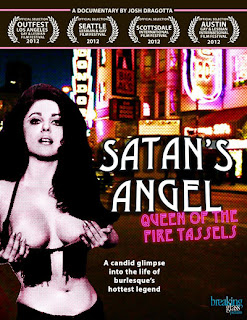 Very often I get the blues that B-Ware Video and Books is no longer in operation in Lakewood. Cult-movie fans, art-house mutants and exploitation-trash hounds came from different counties to patronize the "Bad Movies For Bad People" emporium run by Natalie Wille and her late husband, eminent local musician Ed Wille. Every time a movie comes out like SATAN'S ANGEL: QUEEN OF THE FIRE TASSELS, for example, I can't help thinking how Eddie would have enjoyed it, and how good it would have looked sitting on the shelf with all the Ed Woods, Russ Meyers and Werner Herzogs.

The movie is a documentary on as louche a topic as was ever dear to the B-Ware demographic. Blowsy Angel Walker, 67, may look like a matronly broad, but she is a living legend of "burlesque revival." The "Cadillac of Burlesque" has returned from retirement with an act she honed under the stage name `Satan's Angel,' a routine in which she sets tassels of her nipple pasties ablaze (assuming it doesn't violate the venue's wimpy 21st-century fire codes).


Often in tandem with her prim but very tolerant mother, Walker recounts a Catholic-schoolgirl-rebel San Francisco upbringing. There, nude art-modeling led her to 1960s exotic dancing (more money than office work). She suffered a bone-breaking motorcycle crash that compelled her to forsake go-go choreography for the slow, sinuous moves apt for classic striptease, so that became her subsequent career path. Thanks to her curves and sultry looks, Angel's 12-year of headlining the strip shows in Las Vegas may be a record for the genre.

Despite lifelong lesbianism, Walker had an indeterminate sum of marriages/affairs, sometimes with celebrities. And, while there are indications that Clint Eastwood was a onetime boyfriend, the lady only rates two of her many paramours as decent, caring lovers: Frank Gorshin and Bobby Darin. Those of you who were placing bets, collect at the ticket window.

She entertained Vietnam troops, claims to have been targeted by biker gangs, and succumbed to addiction in the 1980s during a hiatus from a flesh circuit that she found too hardcore-extreme even for Satan's Angel - when the Reagan-era skin shows alternated her act with live, raw sex acts on stage, Walker said her "Catholic" tastes just couldn't take it anymore. But, after hitting bottom, she gradually re-emerged, like Bettie Page, for the retro-kitsch circuit.

Filmmaker Josh Dragotta avoids chalkboard lectures from, say, a Hugh Hefner, Camille Paglia or John Waters about burlesque history, staying with voices of Angel, her mom, and fellow "classic" strippers and modern imitators. One thing he also avoids, rather disappointingly, is showing very much footage of the legendary flaming-nipples bit. Then again, there is much around the edges to suggest that Ms. Walker, brazen as she is, wasn't the most tractable subject all the time.

While there's an intrinsic defense of LGBT relationships, and a timely gay-marriage tie-in (or untimely, as any given gay marriage will prove as disastrous as any given straight marriage, mark my words), any coherent "feminist" interpretation here is mainly implicit in that Angel Walker and other "classic" strippers proudly flaunt realistically aged, Rubenesque bodies rather than Barbie-Doll products of plastic surgery/anorexic emaciation. Oh hell, we all know that "real" feminists out there probably wish the killer biker gang had gotten to Angel after all, so screw them. And all the more reason to check out this docu-appreciation, rickety production values and all.

Best be apprised that, as classic striptease does put the emphasis on `tease,' there is less toplessness than one might expect. Hey, B-Ware did have a children's section, don't forget. (3 out of 4 stars)
Posted by Bob Ignizio at 12:30 AM