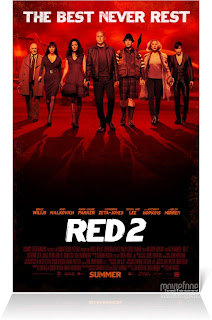 RED 2 is not a bad movie. Next flu season, it’s going to bring a lot of joy to people home sick from work watching HBO2. It’s an unremarkable film that comfortably wades around the original’s broad conceit, making the occasional improvement and the erstwhile diminishment before eventually overstaying its welcome and cutting to credits.

The original cast returns – Bruce Willis as Frank Moses, a grumpy mannequin of Bruce Willis; John Malkovich as paranoid, social maladroit Marvin; and Helen Mirren as Victoria, the Ms. Manners of international assassins – for this globe-trotting hunt for a Cold War-era nuclear weapon.

Directed by Dean Parisot (GALAXY QUEST) and full of triple-crosses, costume swaps and back-stabbing turnabouts, RED 2 plays like a dime-store spy novel as written by a senile Frank Ocean. As it lopes along, the film sprinkles both fresh and veteran performers into the mix, including the delightful David Thewlis, a less-than-spry Anthony Hopkins, Catherine Zeta-Jones (doing what one can only hope is her worst Natasha Fatale) and Lee Byung-hun, the latter of whom is a welcome addition if only for spicing up the monotonous gunplay with occasional martial arts.

Like RED, RED 2 is smart enough to back-burner it’s ludicrous plot in favor of playful performances from its inimitable stars. Its best decision is to alter its thespian pairings with some regularity, giving their one-and-a-half note characters extended life by mixing up the screen teams. This technique is best exemplified through a number of scenes that partner effervescent Mary Louise Parker with eccentric Malkovich, and a decent car chase that finds Byung-hun burning rubber while Mirren rides shothandgun.
Let me take a moment to talk Mary Louise Parker. While I found her bubbly, open-minded character Sarah Ross to be a fun counterpoint to Moses’ sourpuss weariness in RED (although… did anyone else feel like she was kinda just playing Lauren Graham?), here I found her increasingly annoying. Parker’s performance is spot-on… but her character is written less as a restless adult woman looking to assert her fading youthful vigor through some much-needed excitement, and more as a sugar-dusted sweet sixteen begging for a pony ride. That they intermittently dress her in an itsy plaid skirt only further squikifies her relationship with the leathery Willis, drifting it to within collision distance of  what my significant other rightly coined, “creepy daddy/daughter fetish BS.”

I’d also like to point out that the product placement in the film, blatant and prodigious as I’ve ever seen, actually ends up creating a fun, unintended[?] sub-text – as world governments tangle for control of the Western world, their proxies executing trigger-happy power plays and turncoat gambits, the true international powers – the Cokes and Pringles and Papa Johns – invade peacefully, creating a homogenized backdrop before which our country-hopping golden agers obliviously battle.

Replacing RED’s adorable, kitschy postcard transitions with not-faux-enough badass comic book wipes is just one of the ways in which this installment’s tongue becomes periodically dislodged from its cheek.  The first film was able to mine a sense of rebellious wit from the juxtaposition of aging, virtuoso actors and the bombastic violence they sardonically commit. Without that trick up its sleeve, and with nothing to replace it, this unnecessary sequel merely fulfills our most modest expectations.


RED 2 is a simple summer cocktail of black-label actors and draught action – the kind of unremarkably fun trifle that seems poised to underwhelm the theatergoers of today and pleasantly surprise the Red Box renters of tomorrow. (2 out of 4 Stars)
Posted by Matt Finley at 12:01 AM