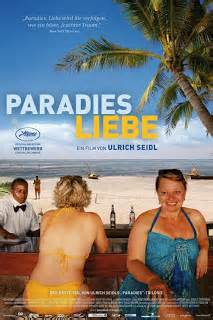 Imagine if Disney took the opportunity to copyright the LION KING catchphrase "Hakuna matata." Would that make Ulrich Seidl's shockingly graphic PARADISE: LOVE, in which the phrase recurs, a kind-a sort-a relation? You all know those movie urban-legends, that the smoke in LION KING spells out naughty words, or that Simba and Nyala do the nasty onscreen?

[Me, my complaint about LION KING always went like this: voice of Mufasa was the proud African-American icon James Earl Jones. Voice of his son Simba was...can't-get-much-paler Matthew Broderick. Wassupwidat? Maybe Uncle Scar was right to distrust the kid after all. Come on, Disney, you can't tell me no other voiceover actor of color was available! You should have asked Julie Taymor to recommend someone, at least. Okay, another rant entirely]

Point is, PARADISE: LOVE would get an NC-17 for its male and female nudity and sexual themes if rated by the MPAA, most definitely and deservedly. The movie is the opener of a loosely-linked "Paradise" trilogy by Austrian filmmaker Seidl. I've so far seen it and the followup, PARADISE: FAITH, but I believe I get the idea. Controversial themes, tackled with austere mise-en-scene that is all long and medium shots, no closeups, and no mood music. The cast is a mix of professional thespians and non-actors, and dialogue in the storyline was largely improvised as the narrative was shot in sequence, lending the painful material a docu-realism. Really, if you took away Seidl's tripod and made his cameras more grainy and digital you'd have another round of Dogme95 certificates to give out.

The untypical-for-Hollywood heroine of PARADISE: LOVE is Teresa, a corpulent, 50-year-old Austrian single mom. As her birthday approaches she treats herself to a vacation in beachside Kenya, along with three similar Teutonic women, all on an intended idyll to enjoy sun, sand and sex with strapping young African men. Most of the other Austrian women are middle-aged and overweight; in fact, even the thin one is overweight. I guess the Victoria's Secret catalogs spirited all the thin ones out of the country.

This brand of flesh-tourism must be a regular deal in Kenya, for, besides a recurring good-time band singing "Hakuna Matata," there is no shortage of German- (and English) speaking local males wanting to sell visitors anything they can, including their bodies. Initially hesitant, Teresa is won over by Munga, a seemingly gallant guy who chases away the parasites and becomes Teresa's lover while asking for no payment. Munga introduces Teresa to Kenyan life outside of the tourist havens. Almost at once, Teresa is moved to start donating to Munga's suffering relatives. Munga suddenly starts cooling in the relationship, and we start to get the sinking feeling this is a gigolo situation after all.

In a bleak view of very modern colonialism on both sides, the lascivious sex-tourist females exploit the impoverished Africans, who are all too happy to give it right back when someone such as Teresa makes the mistake of believing she's found something genuine. One especially squirmworthy scene has the girls hiring a young dude as a sort of exotic dancer for the hen party; another has Teresa waiting, in vain, for a long-distance call from her daughter on her birthday.

The feelgood movie of the summer this is not. Unadorned and unsparing, it nonetheless won my respect for the directness and bravery of Seidl and his troupe for facing such bleak and uncomfortable truths. And I don't see a Disney remake starring Sandra Bullock in the cards, either. (3 1/4 out of 4 stars)
Posted by Charles Cassady Jr. at 12:01 AM