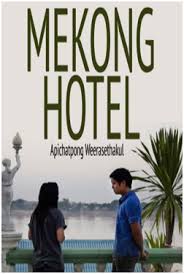 Okay, you got me. I have no idea what this short feature from Thailand art-house darling director Weerasethakul Apichatpong is all about. Know this: that if I still had any pretentious-intellectual friends left over in University Circle, stroking their goatees at MEKONG HOTEL while muttering, "I like the symbolism," they'd dump me for my confession of ignorance like they'd dump an over-30 co-ed.

As in his previous films, such as TROPICAL MALADY, the filmmaker uses long, static takes and, likely, non-pro actors, in a plot that's pretty much a weak-linked chain of vignettes (if even that). At a hotel on a scenic river (the title is a clue; that much I comprehended), a fellow named Masato finds his faithful dog (offscreen) a gross, eviscerated drowned corpse, and he believes this is the work of a "Pob ghost," a sort of vampiric female spirit that feeds off the entrails of the living. He tells this to a pretty guest at the hotel, Phon, and they also banter about the way peasant villagers revere the Thai royal family, especially the princess. Masato and Phon grow pretty fond of each other. In a hotel room Phon watches TV with her mother, and later the two women discuss how Thailand handled its influx of Laotian refugees during the Cambodian crisis.

(most of the internet kids reading these words probably know more about the Skywalker family's role in the Clone Wars than they do about Laos and Cambodia. To be fair, this movie won't exactly fill in any blanks about the latter, while George Lucas minions will gladly elaborate on the former)

It is soon shown that Phon's mother is actually the Pob ghost. There even is scene of her eating human guts, that is about as unexciting and non-explicit as a scene of a woman eating human guts could ever be. Sorry, guys. Masato gets possessed by the Pob, if we're supposed to take this literally. Then there are some long-take sequences of a backhoe at work on the beach, and, later, some laborers doing some sort of landscaping in the distance.

Oh, and throughout there’s an improvised guitar solo that constitutes the entire musical soundtrack. The movie is all over in about an hour, everything but the awards handed out by international film-festival critics and judges. Critics and judges too frightened not to hand out awards to this inscrutable thing for fear of looking like dummies whose knowledge of Thai culture comes mainly from THE HANGOVER 2. Well, sure, nobody wants that. But I'd be dishonest if I told you this picture much engaged me on most any level, because it didn't. Challenged me, maybe. Then again, getting fresh job applications out there is challenging also, and I think in my scant free time I should go after those types of challenges instead.

A little research on this thing suggests that it was more or less the fragmentary results of a project that never quite got off the ground, and that Tilda Swinton might have been involved at one point. So it’s like outtakes, or a rough-rough draft? Damn, I wish I could get away with turning in my own book manuscripts or writing assignments severely unfinished, as “art.” Nice racket.

I am pulling from memories of some books I read about international exploitation flicks, but I do think that in the commercial Thai movie industry there have been homegrown sleazy horror-action pictures that depict Pob ghosts or similar Indo-Chinese folklore goblins and vampires. I doubt any of them will ever get art-museum screenings, but they can't be as somnolent and opaque as MEKONG HOTEL. Can they? (1 1/2 out of 4 stars)

Posted by Charles Cassady Jr. at 8:38 AM