Maniac (July 13th at midnight at the Cedar Lee Theatre) 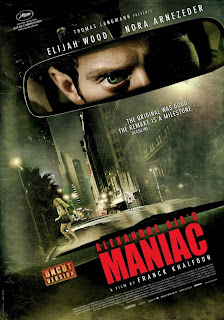 Frodo goes psycho as Elijah Wood takes on the title role in this remake of the infamous 1981 slasher film MANIAC. The plot: Wood plays Frank Zito, a twitchy sleazebag who kills and scalps women, then takes the bloody hairpieces with him to staple on to his collection of mannequins. He feels bad about it, but just can't help himself. Rinse and repeat until 90 minutes are up. That's about it, seeing as the tragic romance subplot that gave the original version some degree of pathos has been retooled in such a way here as to be nearly insignificant.

The fact that MANIAC is shot almost entirely from the POV of Wood's murderous protagonist is about the only thing even marginally interesting about it. Even that aspect of the film is as likely to feel like a cheap gimmick to some viewers as it is to seem like a clever artistic choice to others. Of course that's hardly the only thing in MANIAC likely to polarize audiences. As with the original, many will find it excessively violent and misogynistic. It's hard to deny that there are moments in MANIAC that genuinely feel aimed at the kind of people who get off on seeing depictions of women being brutally assaulted and murdered.

Of course the original version had plenty of uncomfortably sleazy moments that crossed the line for many viewers, too. Where the two MANIACs diverge is that the original had enough other things going for it to warrant giving the filmmakers the benefit of the doubt. While it's still a pretty ugly piece of work, William Lustig's 1981 MANIAC has a kind of grim, sleazy authenticity to it, at times reminiscent of TAXI DRIVER.

What really set the original MANIACapart from the 80's slasher pack, though, was star/screenwriter Joe Spinell's disturbingly compelling performance as Frank Zito. Spinell never lets us lose sight of the fact that this guy is a horrific killer, but he manages to sell us on the idea that he really is suffering with a compulsion he hates and can't control. Despite the odds, Spinell even manages to make the audience feel at least a twinge of sympathy for this despicable character. Spinell's performance was matched by co-star Caroline Munro's turn as Anna.  She actually convinces us that someone as lovely as her would go out with a greasy looking creep like Zito, and once she realizes what kind of monster she's been dating she shows her strong side just as convincingly.As played by Elijah Wood in the remake, Zito is just a typical one note movie psycho, Nora Arnezeder's Anna just another clueless victim.

To be fair to Wood and Arnezeder, the shallowness of their characters is less the fault of their performances than it is the screenplay, co-written by producer Alexandre Aja (HIGH TENSION, PIRANHA 3D) and his usual writing partner Grégory Levasseur. In terms of plot points they don't deviate much from their source, but just about every change they do make is for the worse. Nowhere is this more pronounced than in the film's ending, which in the broad strokes is more or less the same as the original. It's tweaked just enough to drain away almost all of the impact. Sure, one usually lays at least some of this on the director, but given Aja's role as both producer and writer it seems likely he's the true auteur here, with director Franck Khalfoun just doing work for hire.

Even if it's not particularly noteworthy otherwise, MANIAC is at least well made and for the most part devoid of cheesiness. Of special note, the soundtrack by “Rob” (that's what he goes by) is retro synth bliss (think John Carpenter, Tangerine Dream, and the like), but that's about it for positives. Those just looking for competently shot sleazy shocks will likely be content, provided the POV thing doesn't bother them, but anyone seeking more than that would be better off just spending their money on the soundtrack CD. 2 out of 4 stars.
Posted by Bob Ignizio at 12:04 AM