[LOW MOVIE (HOW TO QUIT SMOKING) screens Tuesday July 23 rd at 7:30 pm at the Capitol Theatre.] 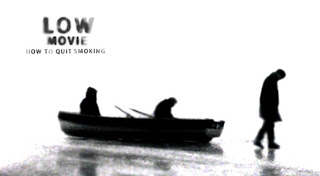 I miss the days when MTV used to actually show music videos as much as anyone, but I'm still not sure I'm ready to pay money to watch videos on the big screen. Concert films, rockumentarys, sure, but a collection of music videos by the same band? That seems more suited for home viewing to my mind. But if you happen to disagree with me on that point, and happen to be a fan of the band Low, then by all means get yourself out to the Capitol Theatre on July 23rd 2013 at 7:30 pm to see LOW MOVIE (HOW TO QUIT SMOKING).

For two decades now, Duluth, Minnesota band Low has been releasing albums and, with director Philip Harder, making music videos to promote them. If you're unfamiliar with the band, which I was prior to watching this, they take a quiet, slow approach to rock. There's more than a hint of retro rockabilly flavored noir in guitarist/vocalist Alan Sparhawk's reverb heavy guitar and drummer/vocalist Mimi Parker's brush work, but it's filtered through a modern indie rock sensibility. It's the kind of music you might expect to hear on the soundtrack to a David Lynch film, dark and dreamlike. My kind of stuff, really.

As for the accompanying visuals, it's pretty much music video 101: lots of mildly surreal imagery married to footage of the band miming to their songs with occasional forays into more conceptual pieces. Harder has a nice visual style, but I'm not sure there's really much of substance here. Certainly there's nothing to tie the various videos together, and aside from a brief introduction, nothing about the band and/or the filmmaker personally, or how and why they work together. The videos are left to speak for themselves, and in that context I can't really say there's anything here that stands out. The music is quite good, but as mentioned at the start of this review, whether that warrants a trip to the theater to see this or not is debatable. Definitely one for the fans. For anyone else: 2 out of 4 stars.
Posted by Bob Ignizio at 12:27 AM