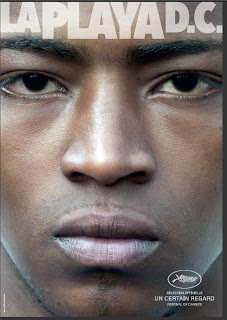 Tomas (Luis Carlos Guevara) is a Columbian young man with definite artistic ability, but his present life situation doesn't exactly present him with may outlets for that talent. His younger brother Jairo (Andres Murillo) is a junkie who has only just returned home after going missing for nearly 3 months. Jairo needs to come up with 100,000 pesos or his deal will kill him, a prospect that frighteningly doesn't seem to worry the young man very much. Tomas turns to his older brother Chaco (James Solis), a petty criminal just out of jail, bit he seems more preoccupied with his own concerns than with the wellbeing of his younger siblings.

LA PLAYA D.C. is shot in an almost documentary like fashion, and every aspect of the film has the feeling of authenticity even if the story is fiction. It's a harsh story about a young man who has to learn that sometimes family members can't be helped, and if you don't want to wind up letting them drag you down, you have to put yourself first. The film may take place in Colombia, but such themes have no real borders.

The performances are utterly believable and the film is very well made. We've certainly seen similar stories, but there's enough in the way of unique cultural aspects to the film, as well as its overall quality, to make it worth watching. It does feel a bit slow at times, but it's usually not long before the plot picks up momentum once again. In the end, LA PLAYA D.C. is a solid attempt to depict in a realistic fashion what life is like for a certain kind of person in a particular place, and as such I liked it. 3 out of 4 stars.
Posted by Bob Ignizio at 1:34 AM