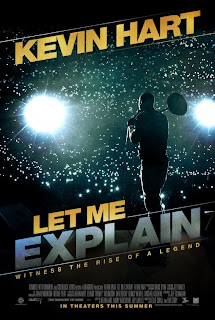 Walking into KEVIN HART: LET ME EXPLAIN, a film featuring performance footage from Hart’s two sold out shows at New York’s Madison Square Garden, I was curious to see Hart’s standup. 15 minutes into the 75-minute film, around the end of the mini-documentary featuring members of the comedian’s global fanbase and loyal entourage respectively hyperventilating over and somberly testifying to Hart’s apparently boundless comedic virtuosity,  my curiosity piqued. Seriously, what’s all the hype about?

60 minutes later, I had my answer. Hart tells jokes. Really loud. With energy. And stuff. Eh?

I’ll admit that the multiple writing credits displayed in the opening titles gave me a touch of the sour apple puckers. I just flat out prefer comics who compose all their own material. But good on Hart for giving credit where credit is due. And let’s be honest – Hart’s standup isn’t living or dying by its literary merits.

If modern comedy’s elite wordsmiths – the Louis C.K.s and Patton Oswalts – are like pharmaceutical engineers, hunched over microscopes , painstakingly working at miracle drugs, Hart is a seasoned Tylenol pitchman, repackaging a time-tested pill in a gaudy new package.

Dressed in a sleek, dark ensemble atop a glittering stage amid intermittent eruptions of (Hart admits) Kanye West-inspired “pointless fire,” the comedian shouts, gestures, pantomimes and mugs his way through a litany of confessional anecdotes and intermittently raunchy observational jokes, most of which you’ve heard before, but all of which he works hard to make his own.

While never outright hilarious, he hits some decisive peaks.

What could’ve been a total snoozer about dude-friends needing a telephone code phrase to indicate the proximity of a significant other, for example, is bolstered by a wild story about Hart’s best friend and coulda-been alibi accidentally selling out the comedian’s extra marital activities. Likewise, a funny, if staid, bit about what happens when women (i.e., “bitches”)  get angry is improved two-fold by a story about Hart’s (still ex) wife stowing away in the trunk of his car.

Then there are the absolute, total clunkers. A bit about his first dalliance with Ecstasy is notably leaden, as is an interminable and Benjamin Button-reference-heavy riff about his penchant for lying. Almost more disappointing is when the set’s best and most original routine – a journey into Hart’s fear of hobo hands and the “bum bumps” they dispense – is stretched far beyond its limited comedic viability.

And, ugh, those first 15 minutes. The film opens with a sketch that finds Hart’s friends confronting him about the ways he’s changed in the wake of celebrity, which segues into documentary footage where everyone talks about how Hart hasn’t ever let fame get the better of him…

First of all, for a comedian whose act positively depends on momentum and energy, it has to be the least compelling (and most confusing) way to start a movie. And what’s the point of it? Is Hart is so concerned that, upon seeing the sold out crowd and jets of flames, sans biographical context, fans will cry Hollywood poseur? Does he think his act is so fantastic that he needs to exponentially ratchet up expectations before lunging out on stage?

Or did he just need to hit the magic timestamp that affirms feature length?

Needless to say, convert me KEVIN HART: LET ME EXPLAIN did not (necessary disclaimer: the Hart fans around me were totally loving it). As independent 5-minute bits chopped out and scattered across the YouTube diaspora, I can entirely understand the attraction to Hart’s frantic, unapologetic histrionics and energy. But a big dose on the big screen? It’s too much personality divided amongst too little insight. (2 out of 4 Stars)
Posted by Matt Finley at 2:29 PM