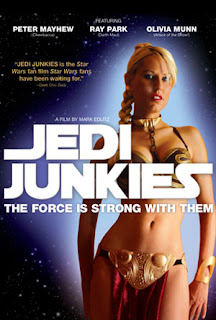 Stop me if you've heard this one before: a documentary feature on the weirdest, most extreme, way-out and nerd-tastic "Star Wars" fans. Actually, you HAVE heard this before. In fact, there exists a veritable, um, TARDIS-load of documentaries about extreme-fantasy/sci-fi devotees, consumed by their hobbies. There's the TREKKIES series, of course, not to mention RINGERS: LORD OF THE FANS, DARKON and Morgan Spurlock's COMIC CON EPISODE IV: A FAN'S HOPE. And in that league of extraordinary gentlemen-with-no-girlfriends, there have already been a handful devoted strictly to LucasFilm nuts - 2001's A GALAXY FAR FAR AWAY probably being the best of the lot.

Finished in 2010 but only now showing up on video (as Master yoda might say, beware outdated websites, you must) JEDI JUNKIES doesn't bring much more to the Mos Eisley Cantina table, but it entertains the home viewer with its parade of dweeb-gasmic fans, each vying to outdo the other in a can-you-top-this fashion.

LucasFilm actors Jeremy Bulloch (Boba Fett), Ray Park (Darth Maul), and Peter Mayhew (Chewbacca) make appearances at nostalgia conventions, Park being especially open and gracious with his time (and stunt-athleticism) for filmmaker Mark Edlitz (a prominent online journalist). And there is a fondly recalled encounter with an offscreen Carrie Fisher. But the main Forces are the fandom, who defend their obsession saying nobody considers team-sports superfans or classic-car cruisers to be so whacko in their analogous behavior.

Interviewees - besides a couple of psychiatric professionals - include a New York City school for light-saber fighting. There are hoarders of Star Wars toys, who own entire production lines right down to minute variations in molds and packaging. There's a metalworker who creates commissioned, one-of-a-kind "Star Wars" weapons and props. This dude says he is comforted that his creations reside in more collections worldwide than had he pursued a standard art career (sorry about those tuition loans you'll never earn back, Cleveland Institute of Art kids - enjoy your summer break).

Continuing on, there are cosplay-girls, belly dancers and ladies of burlesque who attire themselves as Princess Leia in her metal "slave" bikini from RETURN OF THE JEDI, and sexy actress Olivia Munn gives hopes to misfit-outcast-virgin males everywhere by proudly affirming that the she's a nerdy fan too, never mind her alluring looks (Yeah, right, pretty girls dig STAR WARS, right. Reviewer's disclaimer: I don't believe any footage of this part of the movie was shot in northeast Ohio...no I don't).

But, claiming he actually scored, thanks to his "Star Wars" connections, is a guy who attained urban-legend status for building a full-sized Millenium Falcon in his backyard. There needs to be a lengthy footnote, however, that the Falcon was a crudely constructed, short-lived prop for his "fan film," never meant to survive the weather. As did TREKKIES 2, JEDI JUNKIES extensively addresses the culture of fan films, with some most amusing extracts (conspicuous via its absence: "TROOPS," the half-hour spoof that even made an admirer of George Lucas).

There might also need a second footnote: guys like the ones here never score, so please disregard what this fellow brags about on camera. Well...maybe if Olivia Munn somehow thought he was a big wheel at DreamWorks - or Disney.

I am given to understand that, thanks to Disney's "imagineer" stormtroopers now owning the franchise, we might be able to expect a new "Star Wars" live-action movie every damn year now. Talk about clone wars; I can see that getting tiresome pretty quickly.

Hence, the time may come when a viewing of JEDI JUNKIES and its genre cohorts constitutes more solid entertainment than the latest Skywalker antics assembly-lined out by the Magic Kingdom (whose Lone Ranger reboot is bombing badly right now). Or, as Obi Wan always says, I've got a bad feeling about this. (3 out of 4 stars)
Posted by Bob Ignizio at 12:00 AM