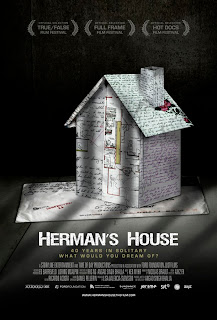 Angad Bihalla's documentary HERMAN'S HOUSE asks us to imagine what it's like to live in a cage, a 6-by-9-foot cell where you can barely turn around. Not for an hour, a day or a week, but for 40 years. What is it like to be Herman Wallace, the man living in solitary confinement since 1974 at Angola, the bleak plantation-turned-prison deep in the remote hills of Louisiana? Wallace, a member of the Black Panthers, was serving a sentence for bank robbery before being convicted, on questionable evidence, of the murder of a prison guard. “I take four steps forward before I touch the door,” says Herman, describing his life in the straightforward narration that punctuates the film. He was 25 when he went to prison. Now he is 71.

HERMAN'S HOUSE is part of a double bill of documentaries showing Wednesday at the Cleveland Museum of Art. Although both are about art, they couldn't be more different. HERMAN'S HOUSE is about social justice, hope and despair. BERT STERN, a portrait of the elite advertising photographer known for revolutionizing advertising art in the '60s and taking the last known photos of Marilyn Monroe, is, at least in part, a portrait of a bored, narcissistic womanizer.

A socially conscious Brooklyn artist named Jackie Sumell heard about Herman Wallace at a lecture on the cruelty of solitary confinement and began writing him letters, stuffed with snapshots of her daily life. Wallace was confused by the young woman's letters, but realized her intentions were good. “It was crazy,” he says, “but it was crazily done for me.” Jackie had the idea to create a virtual “dream house” for Herman. “The only way I could get him out of prison was to get him to dream,” she explains. “What kind of house do you dream of after 30 years in prison?”

A lengthy exchange took place in which Herman described, in elaborate detail, what his dream house would look like. It would have gardens that would greet visitors with gardenias, carnations and tulips. “This is of the utmost importance,” Herman wrote. There would be African art, a swimming pool with a large black panther painted on the bottom, and a room with a “Wall of Revolutionary Fame,” featuring heroes who fought for equality and black liberation. A pair of architects, analyzing the blueprints Jackie has drawn, remark that the layout of Herman's house has an oppressive quality that echoes solitary confinement. “I've spent the majority of my life in a cage,” says Herman. “You're looking at my house, you're looking at me.”

The film juxtaposes the lives of the unlikely collaborators. We meet Herman's beleaguered but loyal sister Vickie, who visits Herman faithfully while struggling with overwhelming loss, including the murder of her son. Jackie works tirelessly to construct an art installation that includes a detailed model of Herman's house, along with a full-sized replica of Herman's cell so visitors can experience what his life is like. The exhibit has been shown in several countries around the world.

Eventually Jackie and Herman decide that Herman's house needs to be built in reality. Herman wants it to serve as a community center for at-risk youth, and to be located in his native New Orleans, a challenge to his plans for an underground pool. He is insistent. Without the pool, he declares, “then it isn't Herman's house.” Jackie hunts for real estate in a bleak New Orleans neighborhood and decides to put down roots there, going into debt to buy a cozy little house that she warmly opens to her overburdened neighbor's young children. Through her journey to build a house for Herman, she seems to have found home. She continues to look for land to realize Herman's dream.

The film uses voices, music and montage in subtle and stirring ways. A sequence that features Herman's voice talking about his childhood years, with film and photographs from the era projected on the replica of his prison cell, is especially moving. This is an advocacy piece that describes the cruelty and injustice of Herman's fate – alongside 80,000 others now being held in solitary confinement in the U.S. But it is also a profoundly human story about home, family and connections. Jackie becomes friends with Herman and his sister. “Nothin' but family,” Vickie says, embracing the Jewish girl from New York as they walk around the modest New Orleans neighborhood where the Wallaces grew up.

Wallace was one of three members of the so-called “Angola Three” sentenced to decades of isolation for the murder of the prison guard, Brent Miller. The case was re-investigated, and one man, Robert Hillary King, was released, while Albert Woodfox and Wallace are still working on getting released. The widow of the prison guard believes the men are innocent. 4 out of 4 stars. 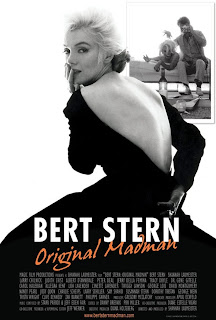 BERT STERN: ORIGINAL MADMAN is a curious documentary. The 2011 film is a warts-and-all portrait directed by Shannah Laumeister, Stern's much younger longtime companion. Stern died in June at age 83. His obituary stated that Laumeister and Stern were “secretly married since 2009.”

The film's title alludes, of course, to the popular TV show Mad Men , which glamorizes the kind of advertising art, and life, pioneered by Stern, Edward Steichen and Richard Avedon. Stern was at the forefront of the sexy, groundbreaking style of advertising that replaced the corny, literal ads prevalent before 1955, when Stern created his influential close-up of a martini glass of Smirnoff juxtaposed against the Pyramids. (In the days before PhotoShop, shooting this required actually traveling to Egypt.)

The film shows Stern, a youngish octogenarian, reclining through most of the film and talking languidly about his life – his drawing talent, how he worked his way up from the mailroom at Look magazine to becoming an art director and photographer, eventually one of the most sought-after photographers in the world. He created memorable portraits of stars like Twiggy, Audrey Hepburn, Gary Cooper, Truman Capote and Elizabeth Taylor, as well as evocative ads for a host of products. His works are now part of several museum collections.

As his fame grew, his life spun out of control. For a time, he was hooked on injected amphetamines. He lost everything and had to crawl his way back. He enjoyed renewed fame when the nude photographs he took of Marilyn Monroe six weeks before she died resurfaced and became the center of a protracted lawsuit.

He seems, in retrospect, bored by it all. He no longer wants to take pictures. “There's enough pictures in the world,” he says.

The main focus of Stern's recollections is women. The reason he took pictures, he says, is women. “Making love and making photographs were closely connected in my mind,” he says. “Women are the goddesses, men are the slaves.” The first of the women he idealized was his mother, who was beautiful, while his father was suicidal. Stern embarked on a long career of taking pictures and seducing women, marrying some of them and having affairs with others. A couple of his ex-wives, including the ballerina Allegra Kent, talk about him on camera in less than flattering ways. Shannah, the filmmaker, whom he first photographed when she was a teenager, remains devoted, as do a couple of garrulous, aging female twins who have been his playmates for years.

I once heard a radio essay about a celebrated ad man who reflected on his long career and found it devoid of meaning. He devoted the rest of his life to working for environmental causes. Stern's photographs are technically flawless, but his brand of art — glamour portraits of models and movie stars and images made for selling booze, cigarettes and other products — seems kind of empty. Although Stern said in 1959, “I like to put my feelings into my photographs,” commercial photography isn't the best vehicle for feelings. Still, his work may be a better spokesman for Stern than he is in the film's sour, late-life interviews. His artistic sensitivity is well displayed in Jazz on a Summer's Day, his gleaming documentary film about the 1958 Newport Jazz Festival, considered by some to be the finest jazz film ever made. 2 1/2 out of 4 stars.

Posted by Pamela Zoslov at 1:51 PM