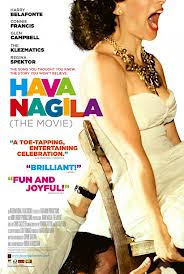 There are a precious handful of documentary features devoted to the history of a single song (not "Cleveland Rocks," sorry). One concerns the blues dirge about American lynching, "Strange Fruit." Another focuses on the widespread left-wing revolutionary anthem "The Internationale." And now comes the motion-picture version of "Hava Nagila," the stereotypical Jewish wedding/celebration music. You don't have to be Jewish (but it helps) to enjoy filmmaker Roberta Grossman's dissertation. And I dare say, it's more entertaining than hearing about lynching and communism over the long haul.

"Hava Nagila" is so thoroughly associated with Jewish culture and identity that some believe it dates back to Old Testament times. But this is false. The tune is actually a Ukrainian Hasidic melody from the 1800s, to which lyrics were put in 20th-century Palestine by Zionist composer A.Z. Idelsohn - or, possibly, his adolescent prot‚g‚ Moshe Nathanson. There has actually been a lawsuit and royalties controversy and bad blood between two prominent Jewish families over this, oy veh! Palestinians, you may now chortle smugly.

As it gained prominence, particularly after being featured in a Zionist catalog of Hebrew-oriented dances and melodies done in 1948 for the founding of Israel (Palestinians, you may now resume being resentful and oppressed), "Hava Nagila" started to gain wider attention. The upbeat, evocative tune was especially popularized by the dynamic young Harry Belafonte, being almost as identified with the multicultural polymath entertainer as Calypso. "Hava Nagila" was also covered successfully by Glen Campbell and Connie Francis. It was parodied by Alan Sherman and deliberately travestied by Bob Dylan. Today it can be found sung by kitschy little Jewish sound-activated dolls, sort of like Big Mouth Billy Bass (whose own family name was probably changed at Ellis Island from Bassolevschezkiwitz).

Serious Jewish musicologists still have misgivings about "Hava Nagila" and its associations, and there are reprises in Hollywood film clips ranging from "Thoroughly Modern Millie" to "Rowan & Martin's Laugh-In" to "Wedding Crashers" in a nod to the "Hava haters."

Filmmaker Roberta Grossman gives her mission statement up front, to use "Hava Nagila" and its iterations to portray the Jewish-assimilation experience and cultural resilience, showing how the song changed with the times, reflecting shifting values and attitudes right up to the YouTube era. Not exactly a groundbreaking narrative concept in the Jewish experience, but the short feature follows that blueprint with aplomb and wry humor. A quirky cast list ranging from Leonard Nimoy to Regina Spektor to illustrious rabbis, rebbes and authors makes the schtick go down like matzoball soup - and, yeah, sure, much the same documentary formula could have been applied to matzoball soup, if you want to get nudnik-y about it. But "Hava Nagila" has a beat - and you can dance to it. (3 1/4 out of 4 stars)
Posted by Charles Cassady Jr. at 12:00 AM