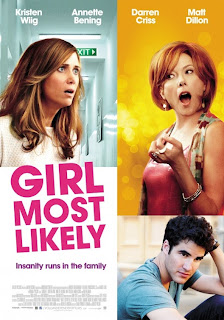 The recent untimely death of actor James Gandolfini focused attention again on the literary qualities of New Jersey – its music, its accents, its colorful rogues — which were the foundation of The Sopranos. The new comedy GIRL MOST LIKELY, a sophomore star vehicle for Kristen Wiig of BRIDESMAIDS, dips from the same Atlantic waters. Its setting, Ocean City, NJ, in all its tacky seaside glory, is a main character in the story of a neurotic woman torn between her sophisticated Manhattan aspirations and the Jersey roots that won't let go of her.

The movie certainly looks tasty. Directed by Shari Springer Berman and Robert Pulcini, the married team behind AMERICAN SPLENDOR, it features serious acting talent: Matt Dillon, Annette Bening, and Wiig, who deploys a subtle, quirky verbal style that's hers alone: awkward hesitation and an offhanded, thinking-out-loud candor that cuts. Her scenes in Judd Apatow's KNOCKED UP, as the TV producer who urges Katherine Heigl's character to lose weight, are among that movie's funniest. (“We don't want you to lose weight, we just want you to be healthy. By eating less.”). Also, it's a movie about a woman, written by a woman, Michelle Morgan. It appears to be just the thing for adult persons who don't like kickboxing, explosions, car crashes or cartoons.

That's why it's frustrating that Morgan partakes of so many predictable screen comedy devices. The resulting film never quite hangs together or hits the comedy mark. Among the seen-it-a-kajillion-times tropes:

Dumped By Her Boyfriend

The heroine must undergo a life-changing crisis in the movie's first reel. And that, even in this day and age, always means being dumped by her boyfriend. Wiig's character, Imogene Duncan, is a once-promising playwright who won a prestigious fellowship but failed to write the play that was expected of her. Instead, she moved in with upper-class snob Peter (Brian Petsos) and hobnobbed with his literary friends, believing she was one of them. One day, Peter announces he's moving out because Imogene really isn't up to his standards. Devastated, Imogene goes on to suffer Standard Humiliation Part Deux:

Fired From Her Job

Devastated by the loss of Peter and facing eviction from their Manhattan apartment, Imogene spends all her time at work crying in her cubicle. There's unrealized comic potential in her job: she writes capsule summaries of Broadway plays for a metropolitan magazine, and gets fired because she can't keep her sardonic personal opinions out of the blurbs. “Your job is just to describe the play,” her irritated boss tells Imogene before firing her. This is followed, of course, by the usual scene of the just- fired character carrying a cardboard box of pathetic office effects – always including a dead potted plant – into the street and dumping it in a trash can. People, can we be a little more creative here?
Too bad it's just a throwaway scene, because the firing sequence reflects the reality of commercial magazine work – cranking out insipid promotional copy and never-ending “listings.” (I have been there, done that, have the emotional scars to show for it.) The screenplay falters by not expanding on its good ideas. GIRL MOST LIKELY looks like it will be a story about a cynical girl making her difficult way through the world. A prologue shows Imogene as a child, rehearsing the role of Dorothy The Wizard of Oz. She stops, questioning why her character would want to return to a “crap farm in Kansas.” Her natural cynicism is amusing, but instead of developing it, screenwriter Morgan plunks her misanthropic misfit into a garden-variety comedy template.

Moving Back In With Crazy Mom

When did it become de rigueur for every adult character in moviedom to have a wacky mom, played by a major star popular in a previous decade? She could be divorced or widowed, but she's always batty — unreconstructed hippie (Jane Fonda in PEACE, LOVE, AND MISUNDERSTANDING), shotgun-wielding feminist icon (Lily Tomlin in ADMISSION), or this movie's contribution, a ditzy, gambling-addicted slattern played by Annette Bening. Imogene's irresponsible mom, zanily named Zelda, is called to the hospital after Imogene attempts suicide (sort of). Rather than admit Imogene to the hospital, as they would in real life, the doctors release her to her mother's indifferent care. (That Imogene leaves still wearing a hospital gown — another “wouldn't happen” moment — is characteristic of the film's sloppy desperation).

Mom leaves Imogene in the car while she gambles at a casino, then takes her back home to Ocean City, where Imogene discovers that Mom is living with a bizarre, self-important younger lover, George (Matt Dillon), who claims to be in the CIA. Mom has also rented out her old bedroom to hunky young boarder Lee (Darren Kriss), a Yale-educated aspiring singer. Imogene is relegated to sleeping in a makeshift bedsheet tent built by her shy, awkward younger brother, Ralph (Christopher Fitzgerald), who's obsessed with crustaceans. A wild mix of plot points converge, including a revelation about Imogene's long-absent father, a Backstreet Boys tribute group, Ralph's invention of an exoskeleton for humans, Imogene's attempt to save face among her phony literary friends, and her ultimate creative triumph, which is eerily similar to Laura Linney's in THE SAVAGES.

The movie is so rich in likable performers, unusual settings and zesty ideas, it's kind of sad it isn't as funny as it should be. At least its inadequacy is in keeping with its theme: like its heroine, the movie most likely to succeed fails to live up to expectations. 2 3/4 out of 4 stars.