GeekFest tries to bring a touch of class (okay, more like Starfleet Academy) to the Akron Public Library, July 27 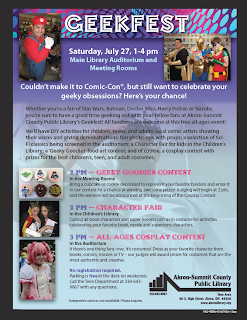 You've all probably heard of the mighty San Diego Comic Con, which started as a surprise-hit comics collectors' convention/swap in southern California in the early 1970s. It mushroomed into a Marvel of a star-studded, fan-interactive multimedia-entertainment showcase in recent years, celebrating (and previewing) blockbuster movies, television, home-entertainment and video games for the treasured 18 to 24-year old demographic.

So much has San Diego Comic Con become Hollywoodized that comic books and graphic novels themselves are now downgraded to a minor sideline there in San Diego. Check out Morgan Spurlock's documentary COMIC CON EPISODE IV: A FAN'S HOPE for details. And if you are Clevelanders, on minimum wage (if employed at all) and too impoverished to even afford the phone call for info on flights to San Diego, Spurlock's movie is about as close as you're ever going to get.

But look! Up in the sky! Well, no, down south at the Akron Public Library, actually. In a declared attempt to bring a sort of Mini Me of San Diego Comic-Con to the northeast Ohio masses, the Main Branch of Akron's library system is putting on the first-ever "Geekfest" on Saturday, July 27, from 1 p.m. to 4 p.m.

This is be a free-to-the-public gathering of local comics creators, screenings of science-fiction movies in the Library auditorium, a contest for "food art" based on fantasy/sci-fi/Japanese anime themes, and, most internet-worthy of all, a "cosplay contest" for those obsessives who like to dress up and cavort as movie, TV, comics and fantasy-literature characters.

Though held under the auspices of Youth Services, the Geekfest is open to all ages, with children/teen/adult categories in the cosplay contest. Rumors that there will be further cosplay categories, "Teens/Adults With Girlfriends" and the much larger  "Teens/Adults Who Will Never, Ever Have Girlfriends" is just me.  Being mean. My own ex-girlfriend was fond of calling me a geek behind my back. I found out about it via a note she accidentally left in a computer I had lent her. So I have issues.

And if you have issues as well - of say, Starlog, or Forrest Ackerman's Famous Monsters of Filmland, Superman's first appearance in Action Comics, a complete run of the PLANET OF THE APES funny books, loads of manga, or whatever - you might want to check out Geekfest yourself. Who knows how it might take off in future years as well?

The Main Branch is located at 60 S. High St. in downtown Akron.
For more information call the Akron Public Library at 330-643-9000. The website is www.akronlibrary.org.