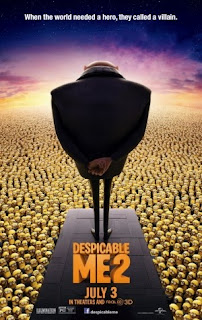 The beats in DESPICABLE ME 2 are so familiar that my daughter—who hasn’t seen the movie—correctly highlighted its ending after I sketched the premise.

The sequel to Illumination Entertainment’s 2010 hit continues the story of “super-bad super dad” Gru (Steve Carell) after his reformation from world’s greatest villain into the doting father of three orphan girls.  When a new techno-terrorist threatens world order with a stolen serum that turns cuddly creatures into mischief-making beasts, Gru is summoned to use his evil expertise to stop him.

Gru loves his kids but pines for companionship, not realizing that the perfect soul mate might be the woman right in front of his protruding proboscis.  Meanwhile, Gru’s eldest daughter experiences romantic tribulations of her own, and henchman Dr. Nefario (Russell Brand) quits the organization for a rival employer who is still criminally active.  There are worn-out jokes about Mexicans, gags at the expense of bureaucratic Brits, and tired references to Australian culture.  There’s Asian stereotyping, too, lest our Eastern friends not be equally offended.

Think THE BRADY BUNCH meets JAMES BOND by way of SPONGEBOB SQUAREPANTS, and you get the idea.  It might as well be called PREDICTABLE ME.

Since the events of the first movie, Gru has converted his suburban lair into a happy home for his three girls.  His army of pint-sized pea-green minions now manufactures jellies and jams instead of bombs and death rays, but can’t produce a commercially viable product despite their Oompa Loompa fervor.  Tired of domestic life, Nefario sputters off in search of a more ominous occupation.  We know we’ll see him again.

Gru is busy placating his girls and perfecting his preserves when he’s abducted by Lucy Wilde (Kristen Wiig), bubbly secret agent of the Anti-Villain League.  Her boorish boss Silas Ramsbottom (Steve Coogan) hopes to ply Gru’s knowledge of all things notorious to the identification and detention of an elusive new baddie, but Gru isn’t interested in playing spy—until Lucy strokes his intact super-villain ego.  The job also offers Gru respite from nosy neighbor Jillian, who keeps fixing him up with her eccentric single friends.

Traces of the missing compound are discovered at Paradise Mall, so Gru and Lucy pose as proprietors of a bakery to determine which shopkeeper is their phantom menace.  Like Agents 86 and 99 from SMART gone confectioning, they aim X-ray glasses, cupcake periscopes, and lipstick tasers at their targets while working up some chemistry of their own.

Gru suspects Eduardo (Benjamin Bratt), hirsute owner of a nearby Mexican restaurant, whom he recognizes as the super-villain El Macho—thought dead years ago after riding a rocket-powered shark into an active volcano.  Ramsbottom wants hard evidence before closing in on their culprit, but Gru’s feelings are clouded after oldest daughter Margo (Miranda Cosgrove) falls for Eduardo’s suave teenage son.  The overprotective father begins makes a case against the Mexican—guilty or not—to keep the youngsters apart.

The mystery unravels into a series of hyperkinetic high jinks typical of computer-animated capers:  Mutating monsters, fart-guns, and guacamole coalesce as Gru and Lucy consummate their crime-stopping partnership at sea and the girls rescue a cadre of kidnapped minions.  It’s a fun but fairly rote “climax” that doesn’t eclipse Gru’s moon-shrinking showdown with the villainous Vector in the first film.

Carell is competent (but perhaps too comfortable) bringing touches of tenderness to Gru’s role as parent along with the flashes of arrogance and pride we’ve come to expect of the once-devious dad.  Wiig—who voiced The Home For Girls’ Miss Hattie last time out—is an over-the-top, karate-chopping sidekick who admires Gru’s gentle rapport with his daughters as much as his intellect.

But this sequel belongs to Gru’s girls and his minions, who own the biggest laughs.  Pigtailed youngest child Agnes (Elsie Fisher) is doe-eyed, adorable, and unafraid to say precisely what she means.  Edith is a blonde tomboy who favors swords and nunchucks over dolls and doilies, and eldest daughter Margo a thoughtful pre-teen who only wants what’s best for her father and sisters.  The minions—led by Jerry, Kevin, and Dave—combine SMURFS-like charm, GREMLINS mayhem, and Jawa ( WARS) nonsense-phonology into a unique slapstick style that earned them their own picture (the forthcoming MINIONS)—but after an hour or so even their shenanigans become grating to anyone outside the kindergarten set.  Their musical numbers (“I Swear,” “YMCA”) don’t help (we saw all that in SHREK, OPEN SEASON, and GNOMEO JULIET, thanks).

DESPICABLE ME 2 will do the trick for parents looking to distract toddlers for ninety minutes in an AC-cooled clime, but it’s otherwise forgettable fare that can wait for DVD.  2 out of 4 stars.