Deceptive Practice: The Mysteries and Mentors of Ricky Jay (July 19th and 21st at the Cleveland Museum of Art) 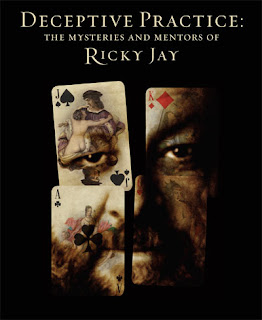 I think I have the solution to the student-loans crisis that is threatening to leave a number of underemployed college and university graduates in endless debt the rest of their lives. It's simple really. Just have all the liquor companies offer scholarships based on binge drinking and champion-level alcoholism. Millions of students would instantly qualify. Why, upper education in Ohio in particular would come practically free.
That's one of my more clever satirical propositions, but what's it have to do with DECEPTIVE PRACTICE: THE MYSTERIES AND MENTORS OF RICKY JAY? Oh, nothing. It's just that Molly Bernstein's documentary is one of the best things I've seen lately. In case this review is read by more people than usual I want them to appreciate my rapier wit.

It also totally diverts attention from the documentary - and I am given to understand that sensory diversion and deception are key to success of close-up magic and illusionism. So there; that's the theme of DECEPTIVE PRACTICE and a lifelong passion of magician-cardsharp/actor/author Ricky Jay, latterly a collaborator with David Mamet on theater and film projects (most famously, HOUSE OF GAMES) that blend dramatic performance with trickery.
Jay has been a performer of close-up magic and card tricks since his youth, and more recently he has turned into a prolific chronicler in book form of forgotten artists and performers of the now-vanished vaudeville, sideshow and Coney Island showbiz circuits. Bernstein's narrative at least half the time addresses the great legerdemain masters of yesteryear, very few of whom rose to household-name status outside of conjuring-trick subculture.
Appearing in wonderful archival footage or from Jay's personal reminiscences are Magic Castle and vaudeville legends such as Cardini ("probably the greatest act I ever saw in my life"), with his wife/assistant Swan producing packs of cards out of his hands as though he can't control it; Slydini; the gifted but tragic (apparently he'd win one of those alcoholism scholarships ) Francis Carlyle; the sphinx-like Charlie Miller; the comical Al Flosso (described as being able to break up the normally stonefaced Ed Sullivan on camera); the dapper Canadian Dai Vernon, and other sleight-of-hand mavens and wizards probably unfamiliar to casual viewers

Jay, late in the movie, is described as an intensely private fellow with some shady associations and strict boundaries about his private life (especially his deliberate estrangement from his New Jersey family while still underaged). Thus, his opening up here is a revelation - assuming one can trust what one sees, when the lesson in magic is, clearly, DON'T! It would be a good time here to mention that filmmaker  Bernstein herself is slated to attend the two Cleveland screenings of DECEPTIVE PRACTICE, so there should be a lively question-and-answer session. But don't expect any tricks to be explained. That would be a "desecration," explains Mamet.
It ends with a rhyming monologue by Ricky Jay that you won't soon forget, and I mean that. All the money-losing $100 million blockbusters this summer might not give you the same type of shivers that Jay does simply in speaking to the lens.
Cleveland's division of the International Brotherhood of Magicians is called Linking Ring 23, if I'm not mistaken. Any of you know those guys, tell them not to miss this movie. Oh, they've already produced a copy. And they're asking if this was the card you picked... (3 3/4 out of 4 stars)
Posted by Bob Ignizio at 2:37 PM