Byzantium (opens July 12th in Cleveland at the Capitol Theatre)

[BYZANTIUM opens in Cleveland on Friday July 12th exclusively at the Capitol Theatre.] 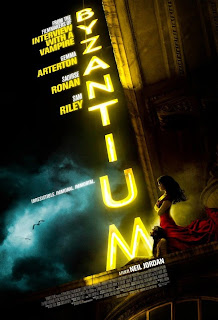 Director Neal Jordan last delved into the world of tragic bloodsuckers with his big budget adaptation of Anne Rice's INTERVIEW WITH THE VAMPIRE. He returns to the genre with his latest film BYZANTIUM, and while there are some similarities between the two films, the territory explored in BYZANTIUM is largely new. Based on a play by Moira Buffini, who also wrote the screenplay, the film is rife with compelling themes – mainly, the sacrifices parents make for their children and the difficulty of letting them leave the nest, and to a lesser degree the way women can be marginalized, excluded, and mistreated by a patriarchal society. While those subjects are treated with the depth and importance they deserve, they never overwhelm the dark fantasy/romance tale at the heart of the story.

The plot concerns a mother/daughter vampire duo who have been walking the earth for a good two centuries. Mom Clara (Gemma Arterton) has endured much for the sake and safety of her eternally sweet-sixteen daughter Eleanor (Saoirse Ronan), but after 200 years they both might be better off if the apron strings were cut like the throats of the humans they prey upon for sustenance. Speaking of the ladies' victims, Clara makes a point of killing the wicked and the powerful, while Eleanor acts as something of an angel of mercy, taking those who are ready to die. Despite being powerful immortals, though, there is something or someone trailing our vampiric protagonists that keeps them fearful and ever moving.

After being involved in an incident likely to attract unwanted attention from their pursuer(s), Clara decides it is once again time to head for new hunting grounds. Arriving at a British seaside town, Clara decides that nebbishy Noel (Daniel Mays) is more useful providing a base of operations than as her next meal. Meanwhile, Eleanor finds a kindred spirit in Frank (Caleb Landry Jones), a young man with leukemia. Interspersed with the present day action are recollections of the past. These flashbacks are told mostly from Eleanor's point of view as she carefully writes her story down before scattering the pages to the wind.

At times BYZANTIUM recalls artsy Euro-vampire films of the early seventies like DAUGHTERS OF DARKNESS or VAMPYRES, only minus the overt eroticism. There's an aura of macabre poetry permeating everything, perhaps best exemplified by the wholly original way in which the film depicts the creation of a vampire. It's the kind of idea Jean Rollin or Jesus Franco might have conceived.

Of course the romance between a 200 year old vampire and a considerably younger amour, even with the genders reversed, can't help but call to mind the decidedly more contemporary TWILIGHT series. The material is handled in a less hormonally overwrought manner here, though. It's also easy to draw parallels with Jordan's own INTERVIEW WITH THE VAMPIRE, which featured an immortal forever trapped in the body of a minor as well. The concept is used very differently here, though, being brought more to the forefront and used to drive home those aforementioned themes about children and their parents rather than being the sidebar it was in INTERVIEW.

It adds a few twists of its own to vampire lore, but at its heart BYZANTIUM is decidedly old school in its take on the undead, and that's just fine. Its vampires don't turn into hideous, hyperactive CGI monstrosities at the drop of a hat, but rather use deception and seduction to hunt their victims unobtrusively. The film is book-ended by a couple of reasonably intense action scenes, and it doesn't shy away from gore and violence when called for. For the most part, though, BYZANTIUM moves at a leisurely pace and keeps its focus on character, story, and theme. That may sound dull to some, but to this viewer it's a welcome change of pace. 3 1/2 out of 4 stars.
Posted by Bob Ignizio at 1:24 PM