[BAND OF SISTERS screens Friday July 12th at 6:30 pm and Saturday July 13th at 1:30 pm at the Cleveland Museum of Art Gartner Auditorium.] 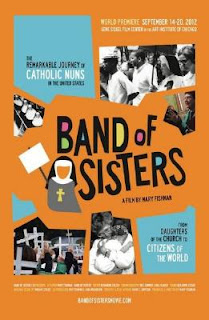 If the movies are to be believed, Catholic nuns essentially come in three varieties: mean school teachers, genial comic relief foils for Whoopi Goldberg, and sinful sex maniacs in seventies “nunsploitation” films. Whichever sort of nun film you happen to be watching, the sisters will all, of course, wear the traditional nun's habit. Any resemblance to persons living or dead is purely coincidental, and extremely unlikely.

To get a better idea of what at least some nuns are like, avail yourself of the opportunity to see BAND OF SISTERS, a documentary film from director Mary Fishman that sheds light on a decidedly more liberal side of the Catholic Church than I imagine most viewers would be used to seeing. And outside of a few archival photos and paintings from the distand, pre-Vatican II past, there's nary a wimple in sight.

BAND details how the once cloistered sisterhoods heeded Vatican II's call for renewal and engagement with the outside world, dropping their classic costumes like a bad “habit” (sorry, couldn't resist) and transforming themselves into social activists. As one interview subject explains, nuns have always been concerned with compassion and social justice. For many years that meant that convents focused on education and nursing, but in the modern world issues of race and gender equality, the Vietnam War, unions and workplace justice, and environmentalism came to the fore for many nuns in America. It's not entirely surprising that the more liberal actions of these sisters didn't always sit well with the more conservative Vatican hierarchy, especially when some nuns began to protest gender inequality within the Church.

I don't know how representative the BAND OF SISTERS is of nuns overall, or if it simply focused on the most liberal of the various orders. Either way, no doubt some Catholics will enthusiastically support what the women profiled here are doing, others not so much. For those non-Catholic and non-religious people like myself, though, BAND OF SISTERS serves as an important reminder that religion doesn't just inspire small minded people to fight to deny certain segments of society their rights and dignity in the name of God. It can also inspire good hearted people to do positive and worthwhile things that cast a far better light on a belief system founded on notions of love and compassion. 3 out of 4 stars.
Posted by Bob Ignizio at 12:00 AM