Augustine (July 26th and 27th at the Cleveland Cinematheque) 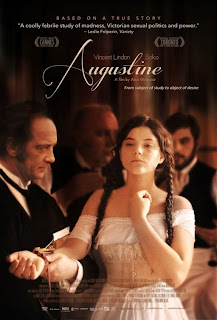 These days we use the word hysteria to describe a mental or emotional state in which a person has lost control. In the 19th century world in which AUGUSTINE is set, the word had a far more gender specific definition. The condition covered a wide range of behaviors that might be exhibited by women, ranging from seizures brought on by epilepsy and actual mental illnesses to just about anything a woman might do that annoyed a man.

2011's HYSTERIA used this less than stellar chapter of medical history as the backdrop for a romantic comedy, ignoring or watering down most of the darker ramifications that could result from being diagnosed with this nonexistent condition. AUGUSTINE takes a very different approach. Its titular protagonist, played by French pop star Soka, is a maid who most likely suffers from epilepsy or some similar condition. She has a seizure while working at a dinner party that leaves her without the ability to open her right eye. Hoping for a cure, she goes to Pitié-Salpêtrière Hospital in Paris After a cursory examination, rock star physician Doctor Charcot (Vincent Lindon) diagnoses Augustine with, what else, hysteria.

Charcot isn't as complete a quack as he might first appear, at least showing some understanding that the roots of Augustine's condition lie with her brain rather than her womb. That doesn't prevent him from trotting his patients out before audiences of “respectable” men where they are hypnotized into having hysterical attacks which inevitably end in enthusiastic autoerotic acts. As Augustine becomes the Doctor's star patient, raising his esteem among his colleagues, so, too, does she benefit by gaining in self confidence and education. Perhaps inevitably, the two also become sexually attracted to each other.

The tone of AUGUSTINE is darkly erotic, in some ways reminiscent of European sexploitation films of the seventies but less, well, exploitative. Writer/director Alice Winocour doesn't shy away from sexual frankness; she just doesn't approach it with the kind of leering voyeurism generally found in such films. Nor, despite the film's darker aspects, does she drain the eroticism out of the movie in favor of joyless couplings as so often happens in modern sex films. There is passion and heat between Charcot and Augustine, and while the film doesn't let the doctor off the hook for abusing his position, neither does it present his patient as a powerless victim. 3 out of 4 stars.