[ANTIVIRAL screens Tuesday July 9th at 8:50 pm at the Capitol Theatre in association with the Cleveland Cinematheque.] 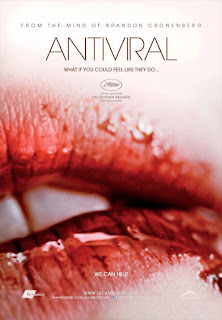 It's difficult to write about Brandon Cronenberg's debut feature without trotting out such timeworn proverbs as “like father, like son” or “the apple doesn't fall far from the tree.” Brandon is the son of Canadian director David Cronenberg, and if ANTIVIRAL is any indication, the two men share some important stylistic and thematic tendencies. Like Cronenberg senior's early films, ANTIVIRAL takes place in a sterile, vaguely futueristic world, and finds its horror within the human body and the ways it can be transformed and modified.

The basic premis of ANTIVIRAL is that a companies in the near future sell diseases that have in the past infected various celebrities to their adoring fans. The idea is that having the same germs in ones body that were in a celebrity will create a closer bond between the fan and the object of their adoration. Given the fame-obsessed nature of our culture at present, it really doesn't seem that far fetched.

A salesman at one of these companies named Syd March (Caleb Landry Jones) is supplementing his income by smuggling diseases out inside his own body and selling them on the black market. That works out fairly well for him until one day he smuggles out the wrong disease and finds himself infected with a virus that just might kill him. To make matters worse, his black market contacts think he's holding out on them, and they aren't the type of people to take that lying down. From there the film shifts into thriller mode as Syd tries to find a cure while trying (and generally failing) to avoid the bad guys.

Where Brandon Cronenberg most significantly differs from his father is in his more modern visual style. He makes use of plenty of hand-held camera work and a faster editing style, though not to the point of obnoxiousness like many contemporary filmmakers trying to ape the BOURNE formula. Despite the faster pace, there are still times when the film drags and/or feels a little on the stiff side, but the premise and Landry Jones' solid lead performance hold things together enough to get past those issues. It's not quite a great film, but there's more than enough that ANTIVIRAL gets right to make the case that Brandon Cronenberg has just as much potential to make a mark in the film world as his father, and I for one will be looking forward with great anticipation to see how he develops. 3 out of 4 stars.
Posted by Bob Ignizio at 12:09 AM