[A HIJACKING opens in Cleveland on Friday August 2nd exclusively at the Capitol Theatre.] 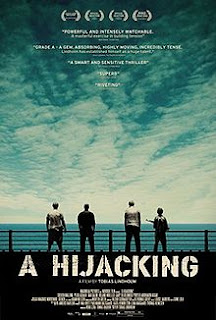 A small cargo ship gets captured by pirates and held for ransom in A HIJACKING. We experience the events primarily through the ship's cook Mikkel (Johan Philip Asbæk), who, at least at first, is used by the pirates to convey their demand's to the ship's corporate owners. Back at corporate HQ, one of the company's best negotiators is called in. At first Peter (Søren Malling) does his best to follow the advice of the expert who has been brought in to help, but as hard nosed as he is in business, Peter finds it difficult to stay emotionally detached from the situation. As for the hijackers themselves, we really see very little of them, and if their motivations go any deeper than a quick score, we aren't told.

The two main characters come across as actual human beings and aren't simply show reacting to their situation in some kind of void. Their personal lives impact how they cope, with Mikkel drawing strength from his desire to see his fiancé and daughter again, while Peter finds personal relationships only get in the way of his job. All he has going for him is his own skill, self confidence, and a staunch refusal to let his men come to harm. On top of that, his superiors don't seem to have much faith in him, and after several months with no success they're about ready to replace him with a new negotiator.


As far as tone, writer/director Tobias Lindholm's film is as straightforward and unsensational as its title. Not having ever been involved in the kind of situation depicted here, I can't say for sure that it's a completely realistic portrayal of what happens when a boat is captured by pirates and held for ransom. That said, I feel fairly confident that it's more accurate than, say, Steven Seagal's UNDER SIEGE. The question remains, though: is a more realistic film necessarily a better one?


More drama than thriller, there are long stretches of A HIJACKING where not a whole lot happens as Peter negotiates with the pirates' proxy and the plot seems to move forward very little if at all. There are no artificially amped up scenes of violence or action to provide entertainment, just the mixture of stress and boredom of waiting for a resolution. Again, not speaking from personal experience, but I imagine that's probably close to how such situations play out in real life. In that way, it's fair to say that the film accomplishes what it sets out to do. Perhaps at times this no-nonsense approach slows things down a bit too much, but ultimately this is still an engrossing, emotionally involving film. 3 out of 4 stars.