A Band Called Death (July 16th at the Capitol Theatre) 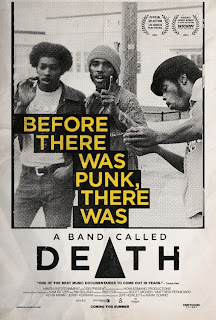 Late sixties Detroit proto punks like Iggy and the Stooges and The MC5 may not have exactly had their albums flying off of record store shelves when they were first released, but at least the records were released, making rediscovery and reassessment some years later a fairly simple affair. Not so the case with the titular combo in A BAND CALLED DEATH, who came along in the early seventies with their own unique brand of Motor City rock.

The band consisted of three African-American brothers – David Hackney on guitar, Bobby Hackney on bass and vocals, and Danis Hackney on drums. Encouraged by their parents to listen to all kinds of music, the brothers soon found inspiration in The Beatles and later, The Who. Although all three contributed substantially to the sound and songs, it was guitarist David who proved to be the true visionary in the group, coming up with the band name and a concept to go with it that he refused to compromise on. David stuck to his guns even when it meant the difference between getting a record contract or not, refusing to change his band's name for Columbia Records president Clive Davis.

Eventually the band's hard line stance and just the general ebb and flow of life led to the group's dissolution, and it seemed they would remain in obscurity like so many other local and regional groups who, regardless of actual talent, just never made it. Of course seeing as there is now a documentary feature film about the band, something must have happened to bring Death to the attention of a whole new generation of rock fans. Even with the knowledge that there's something of a happy ending, the unlikely saga of Death is a fascinating one with more than it's share of ups and downs, triumphs and tragedies, that are sure to hold the attention of not just rock fans, but anyone who loves a good story.

In some ways A BAND CALLED DEATH is reminiscent of last year's most compelling rock doc, LAST DAYS HERE which focused on Pentagram vocalist Bobby Liebling. Both films feature forgotten bands of the early seventies who were certainly good enough to have made it, but for various reasons did not. The reasons for that lack of success are very different, though, as are the paths the various parties took when things didn't work out, not to mention the ways each group eventually became rediscovered and found their place in rock history.

Perhaps a bit too much is made of how ahead of their time Death were – their speed, rawness, and intensity were, to be sure, unusual for the early seventies, but not unprecedented. And there are plenty of other bands, including the aforementioned Stooges and MC5 from Death's own home town, who were “punk before punk was punk”, to quote the headline of a New York Times article on the band. What really matters in the end, though, is the fact that the music is good. Really good. And so is the story behind it, which in turn makes this movie one of the most enjoyable documentaries of the year so far. 4 out of 4 stars.
Posted by Bob Ignizio at 12:33 AM