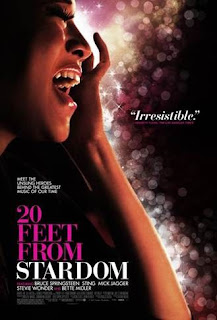 Morgan Neville's enthralling documentary 20 FEET FROM STARDOM could be seen as a companion piece to the 2002 STANDING IN THE SHADOWS OF MOTOWN. Both films tell the stories of the largely unheralded supporting players in pop music: STANDING IN THE SHADOWS profiled the Funk Brothers, the backing band for Motown's biggest hits, and 20 FEET shines a spotlight on the talented background singers whose contributions have immeasurably enhanced pop and rock hits for decades.

You may not know their names, but you certainly know their voices – strong, powerful, sublimely harmonizing voices, often honed in the church and deployed to magical effect by record producers like Phil Spector and Lou Adler in the 1960s and later adopted by rock musicians like Mick Jagger, David Bowie, Joe Cocker and Sting, who adulated the singers' musicianship, and the incredible showmanship of groups like Ike Turner's Ikettes.

The film profiles the marvelous Darlene Love, whose sextet, The Blossoms, started out singing spirituals and was tapped by Phil Spector to sing “He's a Rebel.” That's 18-year-old Darlene singing lead, but the record was credited to Spector's girl group, The Crystals. “We did a lot of ghosting,” Darlene says. The Blossoms were paid only modest session fees. The Blossoms also sang on the Crystals' “Da Doo Ron Ron,” the Ronettes' “Be My Baby” and the Righteous Brothers' “You've Lost That Lovin' Feelin'.”

A theme of exploitation runs through this history. I initially thought the use of African-American background singers by English rock groups smacked of colonialism; after seeing this film, I realized it was the American record producers who misused them.“Spector kept her in a box,” says one of the movie's speakers, an eerie statement reverberant with the anecdote in which convicted killer Spector, while married to Ronnie Spector, kept a coffin in his house and threatened to put her in it.

Love's powerful voice was heard on records by Sam Cooke, Dionne Warwick, the Beach Boys, Elvis and Johnny Rivers. She recorded songs under her own name, notably “Christmas (Baby Please Come Home),” but like most of the background singers who try to launch solo careers, she didn't become a star. Later years found her cleaning houses to make ends meet before she heard her Christmas song on the radio at a house she was cleaning. She realized who she was, launched a comeback, and in 2010 was inducted in the Rock and Roll Hall of Fame, recognized as the greatest session and background singer of all time.

Another singer profiled in the film is Merry Clayton, the incredible soul and gospel singer most famous for her vocals on the Stones' “Gimme Shelter.” She talks about the recording session, for which she was roused from her bed in the middle of the night. She recalls her shocked reaction to Jaggers' stark, apocalyptic lyrics. “Rape, murder?” Her response was to sing the hell out of it. What would that song be without Clayton's devastating descant? (She later recorded her own version of the song.) She also describes how she brought a defiant racial pride to the background vocals for Lynyrd Skynyrd's “Sweet Home Alabama.” The footage of Skynyrd's stage show, with a chorus line of high-stepping girls in red, white and blue hot pants, does make you wonder about the muddled message of Ronnie Van Zandt's anthem. Jagger speaks eloquently about Clayton and the other talented singers, like gorgeous Claudia Lennear — said to be the inspiration for “Brown Sugar” — who have had starring roles in his music. Without their contributions, Jagger says, it would just be him and Keith singing – a far less interesting thing. Bruce Springsteen, Sting and Stevie Wonder, who have made abundant use of background singers, also talk about their invaluable contributions.

Clayton, too, tried to have a solo career, releasing three good records produced by the brilliant Lou Adler, but for some reason they didn't take off. That, the film points out, has more to do with the vagaries of the music business than with talent. There was no place for a female soul-and-gospel singer, because “there's only one Aretha.” Sting says, “It's not about talent. It's about circumstance, luck and destiny.” Lennear, unable to sustain a music career, now teaches Spanish, but hopes to return to music someday.

The background singers are motivated by music, not by fame. The supporting qualities that make them good at background singing don't always lend themselves to solo careers, which require a huge amount of ego and self-promotion. Says rock historian Warren Zanes, “The blend is transformative. Some people want to stay there.” Says Springsteen, “It can be a pretty long walk” from background singer to solo star.

The film not only tells these singers' stories, but also captures the spiritual quality of music, the peak experience of joyously using your god-given talents. Look at the Waters Family, a joyful clan whose voices have enhanced Michael Jackson's Thriller and movies like THE LION KING and AVATAR. And Mable John, a blues singer who was a Ray Charles Raelette and had a distinguished solo career. She left secular music in 1973 and returned to her gospel roots. Now 82, Dr. Mable John sings her heart out in the church: “He has made me glad....”