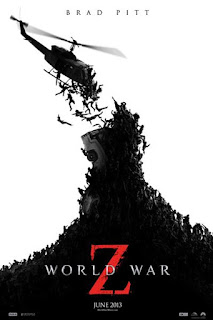 Let's face it, the world doesn't really need any more zombie movies. There are hundreds of the damn things, maybe even thousands by now, and most are just plain awful. Still, every now and then a good one does come along, and even more rarely we get one that has some genuine originality to it. In fact we had one earlier this year in Jonathan Levine's WARM BODIES. So despite my misgivings over the fact that the Max Brooks novel on which it was supposedly based, while a fine book, didn't really lend itself to a film adaptation, I was willing to watch WORLD WAR Z with an open mind and a spirit of hope.

It didn't take long for my hopes to be dashed. It was pretty much the first confusingly shot and sloppily edited zombie attack that did it. Showing the same lack of skill with action scenes that he displayed in the even more incoherently shot QUANTUM OF SOLACE, director Marc Forster seems to think that as long as a lot of stuff is happening really fast and urgently it will be exciting and cool. It isn't. You know what's exciting and cool? When you can actually tell who's doing what to whom, and you hire good special effects guys and stunt people who know how to stage action scenes that are genuinely exciting.

I suppose at this point I should give a plot synopsis just to get it over with. A zombie plague has broken out and infected a good portion of the world. Gerry Lane (Brad Pitt), a former U.N. investigator, is called back to active duty by his friend and former superior Thierry (Fana Mokoena). Exactly why Lane is deemed the most qualified guy for the job is never really explained all that well, but he's played by Brad Pitt so I guess that's good enough. Gerry's family and another little boy they pick up during their escape from the zombie hordes are taken to a battleship where they will be allowed to stay in safety while he sets off with a young doctor to determine the cause of the zombie outbreak, and from there hopefully figure out how to stop it. Various threats, both alive and undead, impede Gerry's progress along the way.

So yeah, nothing special in the plot department, but you could say that about most zombie movies. What makes the best zombie flicks work are generally three things. 1. interesting characters the audience can identify with, and the often tense interpersonal relationships between them, 2. some kind of socio-political subtext, and 3. creative gore scenes and plenty of them. WARM BODIES proved, at least to this critic, that you could do away with number 3 and still have a satisfying zombie flick that treated horror fans with respect while keeping the gross-out factor at a level more palatable to general audiences. And I suppose that's what WORLD WAR Z is aiming for, being a PG-13 zombie flick as well.

The problem is, WORLD WAR Z is lacking in the first two departments, as well. There's not a single interesting character in the film, and if there's any subtext or substance of any kind in the film, I must have missed it. Even the pacing is annoying, alternating between brief sections of exposition (some of which still retain elements of the oral histories in Brooks' book) followed by sudden explosions of over the top action. Rinse and repeat, and sprinkle liberally with CGI effects.

For what it's worth, the production values are better than anything Romero has ever done, even his “big budget” LAND OF THE DEAD, which cost less than 10 percent of what this film was made for just a few short years ago in 2005. LAND may not be as slick, and it wasn't even one of Romero's best, but it still has way more originality and entertainment value than this slick but empty film inspired by his works. 1 out of 4 stars.
Posted by Bob Ignizio at 12:22 AM