The Silence (June 21st and 22nd at the Cleveland Cinematheque) 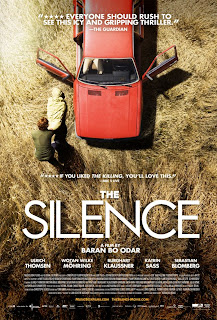 Based on the novel of the same name by the German crime writer Jan Costin Wagner, THE SILENCE, writer/director Baran bo Odar’s feature debut, is an engrossing and mesmerizing police procedural and a worthy addition to growing body of European contributions to the genre.  The film opens in 1986 with a serendipitous meeting of two men, Peer and Timo, sitting on a park bench.  On the surface they look like attractive, wholesome guys next door, but wholesome guys next door they aren’t – underneath the surface lie two twisted and dark hearts.


In the park Peer watches Timo, and apparently his “warped-dar” goes off and he senses a kindred spirit; he soon invites the younger man over to his apartment to watch a movie of an inappropriate sexual liaison between man wearing an animal head and a young girl.  Although we never actually see any of the tawdry details, we know what is taking place and this shared activity of watching the film seems to escalate Peer and Timo’s folie à deux. The men take off in Peer’s car.  They follow a young girl on a bike on to a rural dirt road that bisects a wheat field.  Peer rapes and murders the girl in the field, Timo sits silently in the car apparently traumatized by what he witnesses. His silence is profound – he says nothing to Peer, he does not he report the attack, and silently he leaves abandoning his new friend.


The story jumps forward 23 years to the day of the rape and murder.   A middle-aged woman is riding her bike down a road through the wheat field.  She stops at a cross with the name Pia carved on it.  In the unfolding story we learn the woman, Elena, is Pia’s mother; the crime remains unsolved and the weight of her daughters death haunts her and keeps her tethered to where her daughter was murdered.

On the 23rd anniversary an almost identical rape and murder takes place in the very field where Pia was raped and killed.  This crime is the catalyst for the rest of the film and sets up an eerie and tense journey of discovery and investigation.

THE SILENCE is an ensemble film with a multitude of talented actors giving riveting performances of very complex characters.  Elena is just one of the many haunted and suffering characters that populate the film. There is also Krischan, newly retired from the police force, he was the lead detective on Pia’s case and we learn he can’t let go of it; David, a younger detective who just lost his wife and is half-crazed by his grief;  Peer and Timo who despite outward appearances are as dark, twisted and warped  in 2009 as they were twenty-three years before; and of course the parents of the newest young victim.

The remarkable thing about this film is Odar’s ability to create uncertainty and suspense at such a measured and deliberate pace and also create a work of art where the sense of menace, anxiety and grief underscore every cinematographic turn.  3 1/2 out of 4 stars.
Posted by Bob Ignizio at 1:02 AM