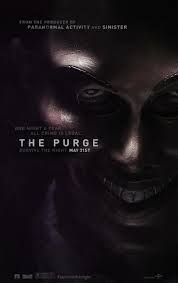 Dystopian survival-horror/action-thriller THE PURGE posits that, in the year 2022, one financial crisis too many results in a strange and disturbing rebirth of America. Under the leadership of "The New Founding Fathers", a majority of Americans agree with their program of allowing a once a year, 12 hour period in which all crime (including murder) is legal as a sort of societal release valve. This somehow solves not just the country's financial problems, but more or less eliminates crime the rest of the year, as well. The Purge, as it's called, is so successful that substantive opposition to it appears nonexistant (at least we don't see or hear any in the film). In fact, it seems that most people treat the Purge with an almost religious fervor, mouthing party-line slogans about purifying the soul. In case you didn't do the math, all this is supposed to be just a mere 9 years from now.

Our window on this world is an upper-middle class family headed up by the status and money chasing salesman James Sandin (Ethan Hawke). He's made a killing selling expensive security systems to other families like his, including most of his neighbors. Wife Mary (Lena Headey) appears to have some reservations about the Purge and the way her family profits from it, but for the most part keeps them to herself. Teenage Zoey (Adelaide Kane) is more concerned with her father's efforts to prevent her from seeing boyfriend Henry (Tony Oller) than any bigger moral questions, leaving the youngest Sandin, Charlie (Max Burkholder), to act as the moral center of the family when a potential victim of the purge (Edwin Hodge) comes seeking shelter from his attackers.

THE PURGE asks its audience to swallow an awful lot of implausible nonsense, but it's possible to suspend disbelief for just about anything if it's done well enough. After all, revered as it is, Rod Serling's The Twilight Zone served up some pretty ridiculous premises from which to hang its social commentaries at times. Because the acting, directing, and writing on Zone were generally of such a high caliber, though, you could  overlook some of the more preposterous plot elements.

Writer/director James DeMonaco is no Rod Serling, though. He's no Paul Bartel for that matter, either. If he were, he might have realized that treating this material as more of a black comedy, as Bartel did in the similarly themed DEATH RACE 2000, might have made its utter ridiculousness easier to buy into while still allowing room for a message via satire. But no, for the most part DeMonaco takes a very solemn tone, as if what he's depicting is some real, literal, and imminent danger.

Aside from pointing out humanity's inherent bloodlust, DeMonaco also uses his film to comment on upper middle class greed and status chasing, familial discord, and the way veterans are mistreated after doing their service, all of which winds up getting kind of muddled. And then there's the inherent hypocrisy of making a movie that takes an anti-violence stance on the one hand, but then includes multiple scenes intended to get the audience cheering when the “good” characters kill the “bad” ones.

The film's only real entertainment value comes from a pair of scenery chewing performances straight out of an eighties B movie. Hawke provides one of them, all swaggering arrogant tool at first, then morphing into a frantic parent fighting for the lives of his family once their home comes under attack. The film's MVP, however, is Rhys Wakefield as the leader of the gang besieging the Sandin family. Said gang is essentially the rich kids' fraternity from every eighties teen comedy ever made if they decided to wear the masks from THE STRANGERS and become one of the gangs from THE WARRIORS. As their leader, Wakefield goes full-on movie psycho while still embodying the kind of privileged douche-baggery one would expect from a character giving Robert Carradine a wedgie.

Outside of those two bright spots, the rest of the film is pretty tepid stuff. Once you get past premise, which we've already seen variation of in everything from the aforementioned DEATH RACE 2000 to the recent hit THE HUNGER GAMES, the film settles into being a run-of-the-mill riff on the old “family fighting back against a home invasion” subgenre (see LAST HOUSE ON THE LEFT, FIGHT FOR YOUR LIFE). But since the film isn't willing to go all the way with the potential transgressiveness and exploitation sleaze of its premise, nor is it willing to fully embrace its potential for camp, it winds up a mediocre bore that never quite finds a consistent tone or makes its point with any degree of impact. 2 out of 4 stars.
Posted by Bob Ignizio at 12:01 AM