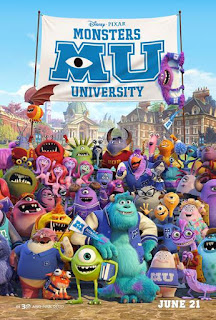 Pixar Animation Studios has whipped up several excellent computerized cartoons since then (FINDING NEMO, THE INCREDIBLES, UP), the most recent arriving courtesy its corporate parents at Disney.

marks the third time Pixar has revisited one of its wondrous CGI worlds, having served up extra helpings of anthropomorphic action figures and automobiles in the TOY STORY and CARS franchises (and FINDING DORY splashes down in 2015).  But this is the first instance of the acclaimed electronic illustrators going backwards, opting for a prequel delving into the history of two of its most beloved characters instead of a sequel about what happens next.

Inspired by a third-grade field trip, 17-year old Mike leaves home for , where he hopes to major in scaring and beef his resume for a career in fear with Monsters, Inc.  He’s enthusiastic and book-smart, but implacable Dean Hardscrabble (Helen Mirren) doesn’t think the one-eyed spud belongs; he just isn’t frightening enough for her venerable institution.  A messy dustup between Mike and rival scarer Sully (who kidnaps a neighboring school’s mutant mascot during a hazing ritual) gives the centipede-like headmistress all the ammo she needs to dismiss them both, but the smooth-talking Wazowksi convinces Hardscrabble to offer pardons if they take top spot at the annual Scare Games.

So the laid-back Sully forms a tenuous alliance with taskmaster Mike and a gaggle of other castoffs in Oozma Kappa –all of whom seem bizarre even by monster standards.  Tentacled Don (Joel Murray) is a middle-aged squid taking computer classes to bolster his work in sales.  Fluffy, purple Art (Charlie Day) is simpleminded—and all legs.  Two-headed Terry / Terri (Dave Foley / Sean Hayes) enjoys sleight of hand and “misdirection,” and young, multi-eyed Scott “Squishy” Squibbles (Peter Sohn) is a geeky blob whose mother’s home doubles as the Oozma “OK” Kappa frat house.

A loss by Oozma in any round will result in their elimination from the games (and expulsions for Mike and Sully), so the misfits must work together if they’re to overcome the horned lettermen in Roar Omega Roar (including Steve Buscemi’s chameleonic Randall) and serpent-haired sisters in gorgon sorority Python Nu Kappa.  A dash through a minefield of prickly sea urchins gets big laughs, a capture-the-flag contest in a library monitored by a giant octopus results in clever impromptu by the hapless heroes, and a stealth-mode showdown in a darkened mansion brings out the best in the OKs.

But a scare simulator scream-off at MU Stadium drives a wedge between Mike and Sully, and only in the film’s final moments, during an unscripted trip into the human world (recalling the “banishment” sequence in MONSTERS INC.) do they find common ground—and an appreciation for one another’s talent.  It’s here, in a gloomy forest, that we’re finally treated to the action, drama, and aw-shucks tenderness we’ve come to expect of Pixar’s colorful creations.

As with many prequels, the suspense here is dampened by our already knowing who’ll make it out alive.  It’s just a question of how.  The best one can hope for is that the filmmakers keep us interested by testing the characters in novel settings and situations, imbuing the current crisis with sufficient tension—and perhaps dovetailing its resolution with events in the subsequent (chronologically speaking) film.  Scanlon manages both, to a boisterous score by Pixar alum (and recent Rock Hall inductee) Randy Newman.

Even tots will spot MU’s common themes and life lessons:  Winning vs. losing (and cheating), belonging vs. ostracism, and individuality vs. conformity.  There’s also a bit of nature vs. nurture tossed in, with Mike’s classroom cramming to become a bona fide bedroom bogeyman a constant source of aggravation for Sully, who commands a casual, unpracticed ease in the art of the scare—and doesn’t bother cracking a book or even bringing a pencil to class.  Kids will also recognize a few monsters from the first flick and get the giggles from another riotous emergency response by the yellow-clad zealots in the Child Detection Agency.  But the cadre of new characters (like Alfred Molina’s Professor Knight) keeps things fresh.

The feature film is preceded by the animated short THE BLUE UMBRELLA.  It’s a cute clip wherein drainpipes and air ducts come to life to help a pair of lovelorn umbrellas negotiate downtown traffic on a drizzly day, but it doesn’t rank with previous Pixar vignettes like PARTLY CLOUDY or DAY & NIGHT.   2 ½ out of 4 stars.