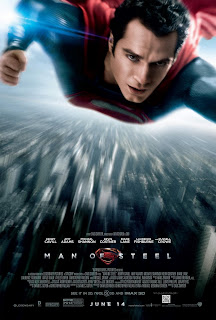 Lots of teens and twenty-somethings quit the proverbial nest to attend college or travel a bit.  It’s a rite of passage in these parts.

Earth, that is.  You see, leaving home to “find oneself” takes on entirely new meaning when you’re actually the sole survivor of a dead, distant world.
Such is the premise of OF STEEL, the sixth major motion picture adaptation of DC Comic’s premiere protagonist—and the best Superman movie in thirty years.

Snyder provides Supes a new wardrobe and soundtrack, stripping away his trademark red Underoos and John Williams’ memorable “March.”  Here, our muscle-bound Samaritan models a cobalt-colored skin suit and maroon cape to an exhilarating score by Hans Zimmer (INCEPTION, BATMAN BEGINS).  Personally, I miss the powder blue pajamas, but we'll tolerate the azure mesh because that’s what all the supers seem to be wearing these days.

Strange, though, not seeing splashes of red and yellow (the belt) about Superman’s midsection; his creators (and native Clevelanders) Jerry Siegel and Joe Schuster might blush—or gasp in horror.  Goyer’s script offers explanation:  The costume isn’t a one-off design by some elderly seamstress, but rather a modified soldier’s uniform from Kal-El’s alien home world.  His biological father, Jor-El (Russell Crowe), and others wear similar unitards.  We also learn the emblem on Supe’s chest isn’t an “S” per se, but a Kryptonian glyphic connoting Hope.  This makes sense, since people on other planets shouldn’t have use for—much less knowledge of—our alphanumeric system.


So why do Kryptonians speak the Queen’s English?

Plot convenience, of course.  How does Kal-El shave and clip his nails?  Are his teeth subject to cavities?  Did he ever have chicken pox as a boy?  It's not relevant.  We play along because such considerations typically aren't consequential.

Ignoring prior films by Richard Donner and Richard Lester and sidestepping Brian Singer’s stodgy SUPERMAN RETURNS, Zack Snyder offers a fresh take on an 80-year old icon.  His Superman hails from a Krypton unlike any we’ve ever seen, a temperate world where dragons share the skies with plasma-powered gunships and citizens are genetically engineered in pea pods, their occupations and destinies predetermined.

In a brisk exposition, Jor-El (Russell Crowe) warns his mentors that their rampant plundering of natural resources has damaged the planet core, setting about Krypton’s incipient apocalypse.  Few buy his doom-speak, least of all prickly General Zod (Michael Shannon), who is banished off-world with his military splinter group after a failed coup.  With Krypton in its death throes, Jor-El and his wife swaddle their natural-born infant in a rocket bound for Earth, where he’ll safeguard their legacy and serve as a galactic ambassador, bridging the two peoples.  Wise men come bearing gifts, etc.

On Earth, the grown Kal-El (Henry Cavill) takes odd jobs in remote places under various names, testing his solar-enhanced powers under conditions that allow him to leave in a hurry if he must, to avoid attracting unwanted attention.  He works a fishing trawler named Debbie Sue—sporting a Wolverine (Hugh Jackman)-esque beard—and waits tables at a Podunk watering hole frequented by misogynist loggers.

It’s in several well-sequenced flashbacks we’re given pieces of Kal’s upbringing on the farm in rural , and of a tortured childhood—as Clark —spent focusing his extrasensory perceptions.  The boy must concentrate to suppress his X-ray vision, acute hearing, opti-beams, and Herculean strength, lest peers spot his…well, inhumanity.

His mother, Martha (), is his emotional lifejacket and surrogate papa Jonathan Kent (Kevin Costner) his moral compass.  discourages his stepson from unleashing his magic upon the world for fear will be rejected—even persecuted.  Yet he nurtures the boy’s character, inculcating humility and poise, for he knows his extraterrestrial adoptee has the potential to literally change the world.

Kal is “outed” sooner than he hoped.  While exploring his alien past in the arctic he triggers a buried technology that reveals his true lineage—but also awakens Zod and co. from their celestial cryo-prison.  Hell-bent for payback, the villain tracks Jor-El’s offspring to and demands his surrender, lest Earth be laid to waste.

Goyer and Nolan inject no small amount of Christian symbolism into the proceedings, highlighting the spirituality of the hero’s metamorphosis.  Zod comes off like Lucifer’s fallen angel against Kal-Clark’s miracle-working messiah, and there are at three instances of “baptism” during aquatic rescues / retrievals.  The Christly Kal-Clark is unsure of his place in our world (if indeed he has one) and torn over when to use (or conceal) the fantastic powers he never asked to possess.  He knows Papa isn’t wrong about humanity’s reluctance to welcome a god in our midst, and that people “are afraid of what they can’t understand.”

Accordingly, the hero-in-wait broods, all but asking the heavens why he’s been forsaken.  He even consults a priest and at one point is pictured with Christ in a stained-glass window over his shoulder.  The analogy is inescapable, really, with Kal-Clark fretting in his own Gethsemane over whether to turn himself in to the Pharisee...er, military police.  The hawkish Colonel Hardy (Christopher Meloni) and General Swanwick (Harry Lennix) act as Pontius Pilate and Herod, respectively, in this Passion of the Supes.
Jor-El and Jonathan Kent aren’t the only father figures.  When Pulitzer Prize-winning journalist Lois Lane submits a sensational story about her brush with the wondrous stranger, Daily Planet editor Perry White (Laurence Fishburne) concurs with Kent and suggests she stifle the article and move on.  Ah, but the doubting Thomas newspaperman redeems himself later with some heroics of his own.
The triumphant third act finds Kal-Clark embracing his inner nature and using his gifts to save Metropolis from a colossal Hoover from Hell that vaccuums everything beneath it and regurgitates the raw material.  Bullied for the better part of thirty Earth years, the being now known as Superman snaps after Zod  threatens his loved ones and resorts to glorious fisticuffs.  He also grapples with Zod’s henchwoman, Faora (Antje Traue) and another nameless—but towering—thug who serves as this installment’s Non.

The climactic showdown(s) makes the big-city face-off in SUPERMAN II look like snail coitus.  Snyder’s Supes (and his foes) move faster than the eye can see, flitting rather than running at one another.  Faora dispatches U.S. troops with Flash-like quickness while Not-Non-Guy hurls locomotives and Lexcorp gasoline tankers.  Walls collapse against the combatants’ weight and pavement crunches under foot boots as they wrestle, manifesting superhero physics in a far more visceral manner than the Christopher Reeve films of yore (bless him).  Every blow comes packed with serious torque, every body-slam resulting in cataclysmic property damage.  Cinematographer Amir Mokri (TRANSFORMERS, FAST & FURIOUS) imbues the melees with the delirium of a toddler unwrapping toys on Christmas morn, sating the Wow Factor fans have nursed for so long.

Brace yourself for egregious product placement:  Nokia devices are showcased throughout the film, 7-11 and Sears stores are prominently featured, and the Smallville IHOP becomes a battleground.  The first two SUPERMAN movies were guilty of this, too, so we’ll forgive Snyder his sponsor nods, especially since he compensates by slapping a brand name from another DC title on a satellite, in a blink-and-you’ll-miss-it moment.

Populated by Academy Award-winners (and several Oscar nominees) and spearheaded by a competent (and thoroughly ripped) Cavill, MAN OF STEEL is the solid, heartfelt reconstruction of a familiar origin tale.  It’s also a consummate summer entertainment that updates the world’s most beloved comic book hero for today’s savvy / finicky crowds without savaging his mythology.  At 140 minutes it’s too long for toddlers, but older kids will be able process the stylized PG-13 action violence (and single use of the word “dick” in a throwaway line) and revel in the spectacle.  Adults will appreciate the spectrum of emotions underlying it all. 3 out of 4 stars.