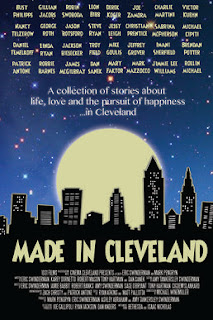 By their nature anthology films tend to be a mixed bag and MADE IN CLEVELAND is no exception. The film consists of 9 short films (apparently there are another 2 shorts that may or may not be in the theatrical cut – they weren't in the screener I watched, though) from 7 directors and 5 writers. Unlike most anthology films, there is no framing sequence and no shared characters; the only thing the various segments have in common is that they take place and were shot in Cleveland, Ohio (and a little bit of Lakewood, too). Some of the segments fail to connect, but there are several that entertain, and a couple of real gems that manage to do that and more.

The shorts that worked best for me were Amy Tankersley Swinderman's “Love of Country” (written by Robert Mason), a fairly serious film about how a Glenville family deals with the loss of one of their members in Afghanistan that features local newscaster and sometime actor Leon Bibb in a strong supporting role; Robert Banks' “Book of Love” (also from a Mason script) in which a two young people flirt using the titles of books they find in the Lakewood public library; and “Domestic Disputes” from director Sage O'Bryant and screenwriter Eric Swinderman in which a couple of EMS workers talk about life, love, and movies before going on a call to treat a husband and wife involved in a domestic dispute who are more or less regular customers. Opening segment “Fucking Cleveland” (directed by BUT I'M A CHEERLEADER's Jamie Babbit, written by Karey Dornetto, and starring TV stars Busy Phillips and Gillian Jacobs) is solidly entertaining as well, focusing on two sisters, one of whom is a recovering sex addict. It also bears noting that the animated title sequence is pretty spiffy.

The rest of the shorts aren't nearly as good, but the biggest problem with MADE IN CLEVELAND overall is its lack of cohesion. Most of the shorts are romantic comedies to one degree or another. That makes “Love and Country”, as good as it is, seem out of place. And at 2 hours long, it's just way too much to sit through without anything tying the various bits together outside of a half-hearted musical montage at the end, which includes a snippets relating to the two segments not included in my screening copy. Honestly, I can't imagine trying add any more material to this already overstuffed film, but I am curious whether the version that is playing local Atlas theaters is the same one I saw, or another 20 minutes or so longer. 2 out of 4 stars.
Posted by Bob Ignizio at 12:50 AM