'Made In Cleveland' opens in its hometown June 21st 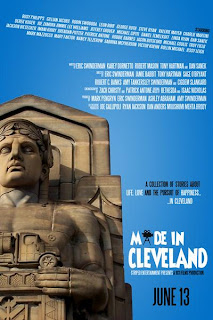 MADE IN CLEVELAND, the largest-ever independent film shot in Cleveland by a local film crew, will be opening across North-Eastern Ohio on June 21st, 2013. The film had its World Premiere on June 13, 2013 at the Atlas Lakeshore 7’s XXDXP 60-foot digital widescreen, the largest movie screen in Northeast Ohio. The film will be expanding to all five Atlas Cinemas locations. “As a locally owned independent theater company, we are excited to support local independent filmmakers,” said Christopher Baxter, director of operations at Atlas Cinemas.

A collection of 9 short films about “life, love and the pursuit of happiness … in Cleveland,” MADE IN CLEVELAND features the work of five writers, six directors and more than 150 actors—marking the region’s most ambitious independent film to date. Early in its production, MADE IN  CLEVELAND attracted national attention, drawing the participation of Jamie Babbit, a Shaker Heights native who has gone on to direct several feature films and television series in Hollywood, as well as her Emmy nominated writing partner, Karey Dornetto. Babbit is joined by award-winning Cleveland-area directors Swinderman, Robert C. Banks, Sage O’Bryant, Tony Hartman, and Amy Tankersley Swinderman.

Babbit and Dornetto’s contribution to the film features the acting work of Busy Philipps, star of the TBS comedy COUGAR TOWN, and Gillian Jacobs, star of the NBC comedy COMMUNITY.
MADE IN CLEVELAND’s ensemble cast also features Cleveland icons Robin Swoboda, a news anchor with WKYC-TV, and Leon Bibb, a news anchor with WEWS NewsChannel 5, in addition to PROJECT RUNWAY alum Valerie Mayen, George Roth (BATMAN), Michael Cipiti (KINGS OF SUMMER) and Jeffrey Grover (TAKE SHELTER).
The film is being distributed by Striped Entertainment.
Posted by Bob Ignizio at 3:28 PM