King Me (now on home video)

[KING ME is now available on home video.] 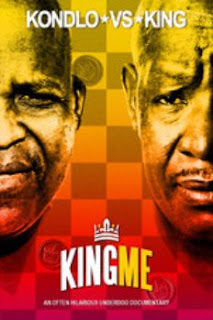 About two years ago I was laid off by a local daily newspaper, the Lorain Morning Journal, for whom I had freelanced arts-entertainment-dining columns and features steadily for 18 years. Though the loss was not unexpected - NE Ohio's economy is in about the same shape as Lou Reed's old liver and kidney - it was a depressing personal and professional setback indeed. What I tried, in fact, was to set into print stories and attractions in the Lorain-Medina-Sandusky circulation orbit, deliberately downplaying Cleveland, a community that tends to hog all media attention - and turns down all my job applications anyway. Why should my readers have to burn extra gas to go to things in the, er, Comeback City (rueful pause) when I could, with a little digging, turn up remarkable material in Lorain's own vicinity?

Well, the documentary KING ME revealed a world-quality event that took place right in Medina, in 2007, on my watch. And I didn't have a clue it was going on. So there's a bright spot: were I still freelance-contracted at the Morning Journal today, I would really be getting yelled at by my editor for gross negligence. Wherein, in actual fact, my editor himself got laid off early this year. So...it's all good. Yes, way to put an upbeat spin on disaster and decline, Charles. Maybe I should apply to Positively Cleveland.

The Medina milestone: a bout at the Ohio State Checkers Championship that pitted athletes of the ubiquitous strategy game against each other to determine who was, indeed, the top checkers Grand Master in the world. KING ME, which was made (very sharply, I might add) by Geoff Yaw, of the Cleveland-based Think Media, turns this unique mental faceoff into deft drama, all the more so because we've had a number of chess features, fiction and nonfiction, plus competing pairs of documentaries dealing with ultimate Scrabble and crosswords fantatics. But...humble checkers?

Though Yaw visits the World of Checkers Museum in Dubuque, his movie avoids the who-are-these-nerds? tone of genre relations. There's no point, with a cast like this. It turns there is a world association of checkers - a game which is called "draughts," in the rest of the English-speaking planet. And the reigning titan of `go-as-you-please' checkers/draughts play (the most common style) is the second most famous person from Barbados after Rihanna. It's Ron `Suki' King, whose longstanding ability to play and win at draughts - including a mass-bout on rollerblades - has earned him Guinness records, made him a star West Indies commercial pitchman, and gotten parks and recreation pavilions named for him. And he's displays the Apollo Creed ego and a strutting attitude to match that gives the movie's title delicious nuances of meaning.

Seeking to dethrone King at the Medina Rodeway Inn is, remarkably, another person of color, and a real underdog. Lubabalo Kondlo is a humble, pious family guy hailing from the impoverished South African townships near the city of Port Elizabeth. He's also a checkers champ, though rather suspicious circumstances have kept him from getting official sponsorship. A ready-made villain (or so editing and a few witnesses claim) materializes in the form of
Colin Webster, head of South Africa's elite "Mind Sports" association, who has repeatedly blocked Kondlo's ability to compete internationally.

It may be more of a social-class/personality clash than resurgent racism/Apartheid, as Webster claims Kondlo has repeatedly tried to take shortcuts and circumvent the bureaucratic ladder up to getting his VISA. Kondlo himself hints that draughts is too often regarded as a lower-class pastime, pursued by township blacks usually idled by mass-unemployment. But in any case, it isn't until an American checkers buff personally intervenes that Kondlo is allowed into Ohio in 2007, to face the verbose, taunting King at last.

Even though checkers is more accessible than chess for many viewers, filmmaker Yaw doesn't use his (obviously considerable) CGI fireworks to dazzle us with possible moves and outcomes, but sticks with the personalities. KING ME, in short, is a winner, The nonfiction storytelling is solid, the outcome is satisfying and not as predictable as one might fear. And ace Morning Journal freelance arts-dining-entertainment reporter Charles Cassady isn't lurking in the background of the Roadway Inn, trying to get his face on camera. Dammit.

I had really hoped to graduate to copy boy after maybe 30 or 40 years at that newspaper. Hey, northeast Ohio, the South African townships just phoned. They want you to stop hogging all the mass-unemployment statistics. (3 1/4 out of 4 stars)