[I KILLED MY MOTHER screens Friday June 7th at 5:15 pm and Saturday June 8th at 7:00 pm at the Cleveland Cinematheque.] 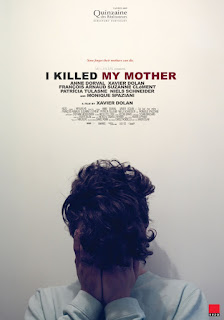 I understand a new book is out entitled The End of Man that potentially explains a lot about my decades of failed job searches. It seems that, as corporate bottom-line-capitalism grows ever more ruthless, the management goal is now to hire as many women as possible instead of men. Females can be paid less to work harder, says the author (a woman herself). Struggling single mothers are especially prized by amoral HR (whom, I personally notice, are always female; the one male human-resource specialist I met had been laid off). Single moms, fearful of their financial lifeline and already beaten-down by parenting chores, will not make any waves while letting the company exploit, overwork and generally walk all over them. So goes the business/Personnel Department principles.

I'm afraid I can readily believe that, at least here in Ohio. And thus, I have doubtless lost numerous opportunities at employment, however thankless, that at least might have paid me a stable, livable wage when I desperately need it. And I lost to bargain-priced single mothers (even though, in desperation, I might have worked for even cheaper than they would) with minimal qualifactions. And I'll bet Cleveland's HR Mean Girls who did the hiring gave themselves a little deep-denial pat on the back that they were promoting `feminism.'

In my fantasies of revenge, I can at least hope these hapless single moms who stole my life are cursed with a son like the one in I KILLED MY MOTHER, a 2009 Canadian (French-Canadian, to be exact) psychodrama with some squirming moments of discomfort in depicting a toxic mother-son relationship.

Shockingly young hyphenate filmmaker-producer Xavier Dolan stars (really courting the Orson Welles curse, kid) as Hubert, a sullen 16-year-old aspiring artist/writer whose feckless father walked out on the family when his son was 4, leaving Hubert in the care of his petit-bourgeois mother Chantal (Anne Dorval). Her last name is Lemming, lest anyone miss the point. Working a middle-class cubicle job and keeping the sterile household filled with kitschy, pretty things, Chantal is the oft-stoic target of her rebellious son's insults and rages.

"When I try to imagine what the worst mother in the world is like, I can't do better than you," the youth shouts. Hubert obviously hasn't seen THE 400 BLOWS; Truffaut served up a pretty memorable specimen there.

Hubert [UNE `SPOILER ALERT,' PEUT-ETRE] turns out to be gay, and he plans to move out and live with his schoolmate crush Antonin, whose own single mom is so cool she cavorts with her latest lover in front of the two boys (now a woman like that is probably single-mom gold on the employment front). Chantal first gives Hubert permission...then takes it back, one of several times her dronelike façade cracks and she locks horns with her offspring, sometimes with venom and fury equal to his - as when Hubert informs a favorite teacher at school that his mother is dead.

Yet, Hubert is also capable of showing love and tenderness to his mother. He just doesn't like her at all. I'm not entirely sure - and all credit to Xavier Dolan that he doesn't spoon-feed the viewer messages like another tyro director would - what opinion we're supposed to have of Hubert. A true deep thinker and prodigy who has to put up with this dull woman? Or a pretentious-intellectual boho prick going through a particularly ugly teen-rebellion phase, whose `artistic' ego requires him to think his own mother is beneath him?

In any case, there are some painfully raw emotions here. Good for John Ewing, of the Cleveland Cinematheque, for not booking this movie as a Mother's Day tie-in (I'll bet he gave it serious thought, though). I was reminded early on that a couple of decades ago there was an American indie movie entitled THE BOY WHO CRIED BITCH, a nervy piece about an uncontrollable, vicious adolescent and his clashes with the young single mom unable to cope with him. It received some notoriety for 1990s distributors not wanting to touch the feelbad property with a ten-foot pole, though the Cleveland International Film Festival did indeed show it on the big screen, to bum out crowds at Tower City.

I KILLED MY MOTHER is not a borderline-horror picture like that one, but many moments are equally uncomfortable. I am given to understand that Xavier Dolan's film similarly floundered in the US marketplace after the distributor went out of business (maybe because HR hired inexperienced single mothers to try and peddle the production instead of employing veteran showman - no, I can't let go of this, I can't). Take advantage of this chance to see the challenging drama while you can. Just - to quote CABARET - don't tell mama. (3 out of 4 stars)