Hors Satan (June 14th and 15th at the Cleveland Cinematheque) 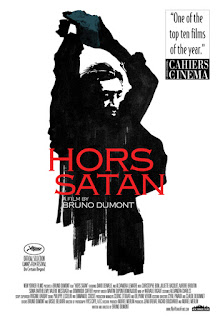 If Bruno Dumont's 2011 French film HORS SATAN had a perceptible sense of humor (it doesn't), mood music (it doesn't) or John Nance or Laura Dern (no, sorry), it could have been called `Lynchean.' Put another way, if the macabre movies of David Lynch were even slower and not half so diabolically entertaining, they'd resemble HORS SATAN.

That's not to say HORS SATAN isn't worthwhile, just that it does seem to take a...well...ungodly amount of time to get under one's skin.

Setting is a sleepy provincial village near Bolougne. Details are sketchy (not helped by the fact that all characters are nameless and seldom speak), but a gaunt vagabond appears on the scene and promptly uses a rifle to sniper-shoot down a farmer. The victim was, so we eventually, hopefully, comprehend, the abusive stepfather of a sullen, Goth-looking local girl.

She winds up falling in love with the killer, although he seems peculiarly hot and cold about the relationship, especially at the idea of things turning physical. Later on, we behold that the guy's lovemaking can have extreme effects on women, either curative or...something else.

The gaunt stranger (more than a few characters here look like the French branch of the Carradine family) commits more acts of homicide and mayhem, and while police are present to investigate, he winds up walking free time and again, almost as if he has some supernatural ability over human perception, as well as life and death. The title, translated as "Outside Satan," is something of tipoff, or at least as much of a Spoiler Alert as any viewer can hope to get, about who the sinister protagonist is and why he's putting on this wildly bipolar display of good/evil.

The narrative unfolds, for the most part, in loooong, pastoral and beautifully composed widescreen takes. As with many a minimalist plotline, it does take time to get going. For the first half, in fact, hardly anything seems to be happening that adds up meaningfully, and every time the image fades to black, one fully expects un film de Bruno Dumont to end altogether. So it is a feat when something of a tale does coalesce, albeit of an upscale art-house horror movie. One that is, even I had to admit, a creepier viewing option than Hollywood's standard-issue based-on-true-events-with-CGI PG-13 ghost drama at the multiplex.

Still, Lynch taking a crack at this material (with Angelo Badalamenti music) would have been something to see, if a little LOST HIGHWAY-ish. Maybe LOST PASTURELAND. (2 1/2 out of 4 stars)
Posted by Bob Ignizio at 1:40 PM