Greenwich Village: Music That Defined a Generation (June 12th and 14th at the Cleveland Museum of Art)

[GREENWICH VILLAGE: MUSIC THAT DEFINED A GENERATION screens Wednesday June 12th and Friday June 14th at 7:00 pm at the Cleveland Museum of Art.] 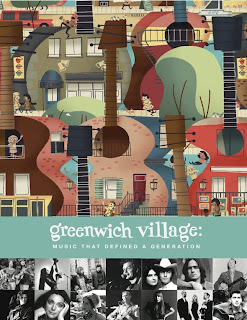 The 1960s American folk music scene has enjoyed so many commemorations that scenes of Pete Seeger and Peter, Paul and Mary singing protest songs against a backdrop of Vietnam War footage are by now entwined with our cultural DNA. So Laura Archibald's new documentary, GREENWICH VILLAGE: MUSIC THAT DEFINED A GENERATION, has an overly familiar feeling. In the words of folk-rock luminary David Crosby, “I feel like I've been here before.”

The talking-heads doc focuses on New York's Greenwich Village, the working-class immigrant enclave that in the 1950s and '60s  was a mecca for artists, musicians, poets, misfits and idealists. With guitars slung casually across their backs, these pilgrims made the Village the birthplace of an exploding folk music movement. Their passionate, relevant songs became the soundtrack of the turbulent '60s. “We had found a place where we all fit,” recalls Judy Collins, whose angelic voice popularized so many of the era's loveliest songs.

Archibald bases her documentary on a memoir by Suze Rotolo, an artist and activist best known as the girl clutching the arm of Bob Dylan, her then boyfriend, on the cover of The Freewheelin' Bob Dylan. The words of Rotolo, who died in 2011, are read by actress Susan Sarandon. A typical excerpt: "The sixties were an era that spoke a language of inquiry and curiosity and rebelliousness against the stifling and repressive political and social culture of the decade that preceded it. The new generation causing all the fuss was not driven by the market: we had something to say, not something to sell." The grandiosity of these pronouncements can be irritating, and yet the power of the music is undeniable.

While covering the important events of the era, from the blacklist that banned Pete Seeger and the civil rights struggle that galvanized many of the musicians, the film's narrative is unfocused and given to such bland statements as “The 1960s were an eventful time.” Certain assertions, such as that the topical songs of Phil Ochs had a “limited shelf life,” are dead wrong, unless you believe that the government has stopped lying about war, we're no longer executing people, and racism and injustice are quaint relics of the past.

The interviews are not very illuminating, but the musical performances are electrifying. The focus on New York artists makes for some significant omissions, but most of the performances here are electrifying: the strong, deep voice of Odetta, Richie Havens' famous “Freedom/Motherless Child” from Woodstock, Melanie's stratospheric, Woodstock-inspired “Lay Down (Candles in the Rain),” Ian and Sylvia's iconic Canadian ballad “Four Strong Winds,” The Lovin' Spoonful's more easygoing and commercial but no less musically solid “Do You Believe in Magic?” which give the viewer an idea of the folk scene's meteoric energy and lasting influence. The performance that thrilled me most was Richard Fariña performing, with his sweet-voiced bride Mimi, his bitterly comic “House Un-American Blues Activity Dream,” a denunciation of McCarthyism punctuated by a contemptuous kazoo, not long before a motorcycle ride in 1966 took the 29-year-old Fariña life. The music and untimely deaths of prophetic figures like Ochs and Farina represent hope and destruction, the twin pillars of the 1960s. 3 out of 4 stars.