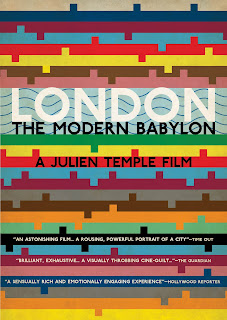 Temple (Joe Strummer: The Future is Unwritten) time-travels through London from the start of the 20th century to the 2012 Olympics, threading past and present voices with film archives and popular music across the century.

Trailer: http://www.youtube.com/watch?v=tjHnWyJhkzo
LONDON: THE MODERN BABYLON is legendary filmmaker and music-video director Julien Temple’s (Joe Strummer: The Future is Unwritten) epic time-traveling voyage to the heart of his hometown. From musicians, writers and artists to dangerous thinkers, political radicals and, above all, ordinary people, is the story of London’s immigrants, its bohemians and how together they changed the city forever.
Reaching back to the dawn of film in London at the start of the 20th century, the story unfolds through film archives and voices of Londoners past and present, powered by the flow of popular music across the century—a stream of urban consciousness, like the river which flows through its heart. It ends in present day, as London prepares to welcome the world to the 2012 Olympics.
LONDON: THE MODERN BABYLON will screen in Cleveland at Capitol Theatre on Thursday, June 6 at 7:00 PM and Saturday, June 8 at 11:00 AM.
The theatrical release of LONDON: THE MODERN BABYLON in 15 U.S. markets during the week of June 3 is the final film in Cinedigm’s (NASDAQ: CIDM) new DOCURAMA multi-platform film brand and inaugural series of national theatrical screening events (http://www.docuramafest.com). The DOCURAMA film series has attracted national attention for its unique series that has brought 7 award-winning documentary films in 7 weeks into theaters nationwide, from April 22 through June 9.
Time Out London says it’s: "An astonishing film…a rousing, powerful portrait of a city.” The film had its North American debut at the Toronto International Film Festival. Later it was nominated for Best Documentary at both the British Independent Film Awards and the European Film Awards.
In partnership with GE FOCUS FORWARD-Short Films, Big Ideas, a curatorial program inspired by GE’s vision of innovative people being the catalyst for world change, DOCURAMA will present a 3-minute short documentary with each feature film that has a complementary theme or subject matter.
ALL HAIL THE BEAT, from author, historian and filmmaker Nelson George, will be shown before every screening of LONDON. The sounds of the Roland TR-808 drum machine inspire musicians around the world, even though the device hasn’t been made since 1984 and most of its avid users have never actually seen one.
Every screening of LONDON will be followed by a pre-taped Q&A with the director.
Posted by Bob Ignizio at 12:00 AM