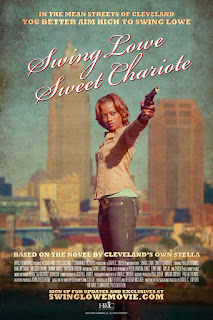 Digiplex Solon Cinema 16 will be rolling-out the red carpet for newly-inducted Rock & Roll Hall of Famers, Public Enemy, for the World Premiere of Cleveland independent film “Swing Lowe Sweet Chariote,” an emotionally charged urban drama that is based on a novel by Cleveland author, Stella Hall.

Director and editor, David C. Snyder, has directed all of Public Enemy’s music videos since 2005 and has a close working relationship with the group. Because of that relationship they managed to get a theme song for the movie and have lead man, Chuck D, appear in the film.

"Chuck and I have been working together on projects for years now and he always makes himself available for whatever I happen to be working on. We are incredibly fortunate to be able to call on a legend like that and have him enthusiastically contribute to our films," said Snyder.

"I was a Public Enemy fan from the first time I heard their music 25 years ago but now they have become part of our family. They continually lend their talent and support to our films and I cannot thank them enough for that."

The film is told from the perspective of a young African-American girl from inner-city Cleveland whose best friend is murdered two weeks before she’s set to graduate top of her class from high school. After this traumatic event, her life begins to take a major turn as she struggles with inner demons that she never knew were there.

The movie was predominantly shot in the city of Cleveland, with the exception of a few scenes in Euclid and University Heights, and has many recognizable landmarks throughout the film including the old Big “Q” Furniture Store on E. 55th Street and Woodland Avenue, CMHA’s Outhwaite Homes, and Harvard Wine and Grille.

Executive producer John Delserone added, “it’s only fitting that a movie that takes place in, was filmed at, and stars all-Cleveland talent should premiere in the Cleveland area.”

This red carpet event will begin, June 24th, at 6:30pm EDT. The movie release party will begin immediately after the film, next door, at the TS Macklin Event Centre. Fans will get the chance to meet and greet with Public Enemy and the entire cast and crew at the release party.

The movie will be available on DVD and Blu-Ray on June 25th at the movie’s official website, swinglowemovie.com, and Krush clothing store locations.
Posted by Bob Ignizio at 12:00 AM