Wrong (May 4th and 5th at the Cleveland Cinematheque)

[WRONG screens Saturday May 4th at 9:45 pm and Sunday May 5th at 8:15 pm at the Cleveland Cinematheque.] 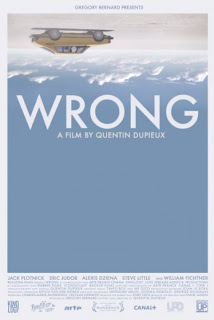 Dolph (Jack Plotnick), A fairly ordinary looking guy in an ordinary looking suburban home, wakes up one morning to find that his dog Paul is missing. Beyond that, however, very little about WRONG could be considered “ordinary”. There's a palm tree that transforms into a pine, an office where the sprinkler system constantly pours down on workers seemingly used to the discomfort, and a self-help guru who kidnaps people's pets. There is a plot, and it's despite its absurdity and surreal turns it isn't hard to follow. Whether it adds up to much is another story, but like writer/director Quentin Dupieux's previous film RUBBER it's an agreeably daffy concoction.

Keeping the weirdness grounded is the splendidly deadpan lead performance by Plotnick. He's nicely complimented by the more caricatured portrayals of the supporting cast which includes one of my favorite modern character actors, William Fichtner, in yet another memorably odd role. Also adding to the film's appeal is Dupieux's strong visual style. WRONG may be lightweight and ridiculous, but at least it looks good. Sounds good, too, thanks to Dupieux's soundtrack (done under his “Mr. Oizo” pseudonym).

Unlike the films of Luis Buñuel or Leos Carax' HOLY MOTORS from last year, films that on the surface share a similar surrealist approach with WRONG, there's no real attempt to make a serious statement or be edgy and subversive here. Whatever social commentary Dupieux may be trying to make, his film seems far more interested in just being a fun, playful bit of nonsense. As such it's a pleasant enough way to kill an hour and a half. 2 1/2 out of 4 stars.
Posted by Bob Ignizio at 12:00 AM