[UPSTREAM COLOR opens in Cleveland on Friday May 10th exclusively at the Capitol Theatre.] 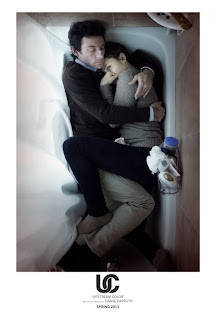 I'm not even going to pretend I completely understood everything that happened in UPSTREAM COLOR. The plot is kind of amorphous and meandering, involving maggots or grubs of some kind that a conman (Thiago Martins) is putting inside pill capsules and selling as a street drug. Those who ingest the larvae hallucinate and become highly suggestible, allowing the conman to do things like suggest to Kris (Amy Seimetz) that she take out a home equity loan and give the money to him. In addition, the larvae evidently grow and replicate inside the host body. It's only thanks to a mysterious guy who shows up with a truck full of PA equipment blaring weird sound effects that somehow draw the worms out of Kris' body that she is freed of the parasites, which are then drawn into a pig. So yeah, pretty much your typical start to a movie.

Kris' life is a shambles after her ordeal, but when she makes a love connection with Jeff (writer/director/etc., Shane Carruth) it looks like things might get better. As it turns out, Jeff has gone through the same weird experience, but whether that will ultimately bring these two closer together or push them apart remains to be seen. Meanwhile, the guy with the sound system hangs out on a pig farm (where apparently the pigs who sucked out the larvae all live) and records various weird sounds. He also somehow manages to astrally project himself to locations where past victims of the larvae are at. I think.

Yeah, this is a pretty strange movie. Many critics have compared UPSTREAM COLOR to Terrence Malick's recent TREE OF LIFE. With its impressionistic visual style and the way it follows more of an emotional rather than a linear narrative, that's not an unfair comparison. There are also elements that recall early Cronenberg (the idea of humans undergoing strange and horrifying mutations) and Lynch (the emphasis on disconcerting sounds). Finally, the way in which the film depicts the romance between its two main characters as a kind of insanity is very much akin to William Friedkin's BUG, right down to the use of bugs as symbols.

Similarities aside, UPSTREAM COLOR is its own film. As the late Roger Ebert often said, it isn't what a film is about, but how it is about it. The way UPSTREAM COLOR goes about “it” is decidedly obtuse and murky, and yet in spite of that it's still kind of compelling. Certainly the visuals and the performances are a large part of that, but so is trying to figure it all out. My guess is that the film is a call for humanity to get back in touch with nature, represented by, among other things, the frequent use of Thoureau's Walden.

This is the kind of movie that probably should be viewed more than once before filing away one's final pronouncement, but since I don't have that luxury, first impressions will have to do. On one hand I welcomed the challenge UPSTREAM COLOR presents, while on the other I found it kind of annoying and smug. One has to wonder whether the effort expended in trying to understand the film is worth the rewards of doing so, and at the moment, I'm honestly still not sure. Let's call it... 2 1/2 out of 4 stars.
Posted by Bob Ignizio at 12:01 AM