[THE LAW IN THESE PARTS screens Wednesday May 22nd at 7:30pm at the Cleveland Museum of Art.] 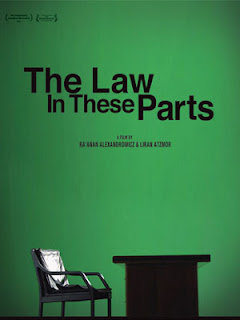 “The law is an ass.” The phrase, grumbled by Mr. Bumble in Oliver Twist, applies to the subject of Israeli filmmaker Ra'anan Alexandrowicz's documentary THE LAW IN THESE PARTS, an examination of the laws used by Israel to justify its 46-year occupation of the West Bank and Gaza and the differential treatment of Palestinian and Israeli defendants in its courts. The film, which has been very popular in Israel, is largely an indictment of occupying Israel. It demonstrates how the treatment of Palestinians is legal, as were Nazi Germany and apartheid South Africa, but unjust. In Bumble's words, an ass.

Alexandrowicz attempts a technique similar to Errol Morris' The Fog of War, which peered into the soul of Vietnam War defense secretary Robert McNamara. The filmmaker interviews a series of prominent Israeli lawyers and judges who helped write and implement the laws. He seats them against a backdrop on which he projects film clips of decades of Palestinian resistance.

The technique is interesting but not particularly revelatory. The now elderly legal men, who include Dov Shefi, retired Brigadier General and Legal Advisor for the West Bank Military Command 1967-68, military prosecutor Lt. Col. Abraham Pachter, explain with meticulous reasoning the basis of laws enabling Israeli military rule over Palestinian territories conquered in the 1967 war. “Overnight, about a million people were subject to new law,” the film recounts, raising a shudder at the echo of Nazi occupation. The law that applied to the indigenous population was not the same as Israeli law. To apply Israeli law, explains Dov Shefi, would have implied “that you intend to annex the region and to grant citizenship.”

Under laws devised by the Israeli military legal corps, Palestinians were subject to rule by the IDF (Isarel Defense Forces) – “What the IDF says, goes,” says Shefi. Demonstrators and insurgents were tried by military courts, with IDF soldiers, some with legal training, as the judges. Legal questions were decided by the Israeli Supreme Court, almost always in favor of Israel. Defendants who were members of Palestinian resistance groups were found to not merit the status of legal combatants under the Geneva Conventions. A widowed mother of five was found guilty of giving food to armed infiltrators hiding in her village. The defense's argument that giving food is a universally accepted human behavior was rejected because “human values do not apply to infiltrators – “they are venomous snakes.” The woman was sentenced to a year and a half in jail.

After telling the story of the jailed widow, Irifa Ibrahim, the filmmaker muses that it would be a good idea to interview her. We agree: an interview with a Palestinian would make the film more interesting. As it is, it's a lot of old men droning and the director ruminating about his filming technique. No sooner has Alexandrowicz he raised the idea than he rejects it. “I do not intend to interview her.”

That is not to say the film isn't illuminating. It highlights the inequities of a nearly half-century military occupation and expanding illegal settlements in the Middle East's highly touted lone democracy. Whenever Israel wants to do something, a legal way is found to do it. International law prohibits Israel from taking Palestinian land for its own use, so one legal expert saved the day, citing a little-known Ottoman law that characterized the land as Israeli “state land.” ,Now, half a million Israeli settlers live on land in the West Bank seized from Palestinian people. The Israeli settlers have a different set of laws applied to them, and their crimes against Palestinians are almost never punished. “You have to be practical,” says one of the legal men. “You couldn't treat them the same.” It's clear that the U.S., in its never-ending war on terror, was influenced by Israel's policies – targeted killings of suspected terrorists, “administrative arrests” of people arrested without being charged and held indefinitely, as the men now are in Guantánamo.

One of the retired legal men confesses to some sleepless nights over decisions made and sentences issued. The others have no regrets. One points out ways in which Israel's justice system is unusually fair. Palestinians, for example, can appeal their convictions to the Israeli Supreme Court. “Nowhere else in the world,” he says, does an occupying force defend the population from its army.

Israel's actions seem indefensible – Operation Cast Lead, the 22-day siege of Gaza in 2009 that left 1,387 Palestinians and nine Israelis dead; the 2010 Israeli raid on the Mavi Mara flotilla into Gaza, in which IDF soldiers killed nine activists (one shot from behind at close range). But the killings are always justified as necessary for security. Scholar Norman Finkelstein, the noted critic of the Israeli occupation, has pointed out that over a seven-year period, Israel killed some 4,700 Palestinians and Palestinians killed about 1,000 Israelis, a ratio of about 4.7 to 1. “The ratio for civilians is about three to four Palestinians for every Israeli civilian who has been killed,”

The film raises provocative issues, but it is stubbornly un-cinematic, centering primarily on a succession of men sitting at a desk talking. However, the vintage footage – early Palestinian uprisings, the violent, fanatical zeal of the West Bank settlers roaming the territories with guns -- is fascinating. Its existence confirms Finkelstein's description of this as “the most heavily monitored conflict in the world.” This Israeli-made film, like last year's excellent documentary The Gatekeepers, also demonstrates that the occupation is avidly debated in Israeli society. Israelis don't accept what their government does without question, unlike the proopaganda-influenced U.S., where any whiff of criticism of Israel is met with bitter attack and denunciation. Two and three-quarters stars
Posted by Pamela Zoslov at 2:28 PM