The Girl (May 24th and 25th at the Cleveland Cinematheque) 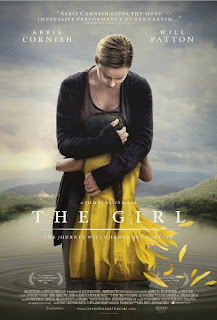 Indie films can be just as hackneyed and cliché as any 'B' monster flick that turns up on Syfy. Case in point, THE GIRL. First and foremost, this is yet another movie in which a hardened curmudgeon begins to soften when unexpectedly saddled with having to take care of a cute kid. The curmudgeon is this case is Ashley (Abbie Cornish), an alcoholic whose son Georgie has been taken away from her after a drunk driving conviction. Ashley is ostensibly trying to get her life in order to get her son back, but rather than take responsibility for her less than stellar way of life she opts instead to blame everyone else – her boss, the social worker who comes to evaluate her home, her dead-beat dad.

Ashley believes that the only thing keeping her from getting her son back is money. When she sees the kind of cash the aforementioned dead-beat dad (Will Patton) is making transporting illegal Mexican immigrants across the Texas border, Ashley decides to follow suit. Unfortunately it isn't as easy as she expected, and her first attempt ends in disaster with most of her charges being forced to go back to Mexico when a helicopter patrol spots them.

Only three immigrants make it into Texas, among them the young girl Rosa (Maritza Santiago Hernandez) who has been separated from her mother. Ashley tries to play the hard-ass, but eventually winds up trying to help Rosa reunite with her family. Along the way, Ashely and Rosa begin to bond with one another, and Ashley's heart begins to soften. But when pressing issues at home regarding Georgie intrude, will Ashley abandon her young charge to go home?

Yeah, we've seen this kind of thing before in movies like CENTRAL STATION and KING OF MASKS, among others. And the whole transporting illegal immigrants aspect of the story recalls FROZEN RIVER. As for the likable scoundrel father who abandoned his kid(s), thus contributing to another generation's litany of issues, the number of films utilizing that bit is too great to count. I guess what I'm saying is, is that there are a lot of familiar elements here.

Of course, this is exactly the kind of “indie” film that can actually attract paying audiences, just as generic slasher sequels and remakes tend to rake in more cash than horror films with any degree of originality and/or intelligence. THE GIRL may seem more sophisticated and classy than FRIDAY THE 13TH PART 27, but in the end it's just as calculating and commercial.

For what it's worth, though, THE GIRL is a fairly well made example of its type. The central performance by Cornish is solid, if a bit too obviously meant as Oscar bait. Riker's script may be little more than a recycling job, but his direction is solid. And as familiar as it all is, if you don't feel at least a little something for Rosa, you just don't have a heart. In that spirit, let's say... 2 1/2 out of 4 stars.
Posted by Bob Ignizio at 12:00 AM