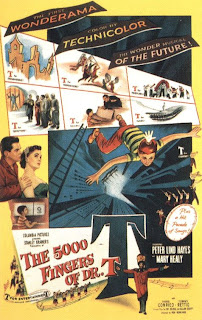 I once applied to work at one of the few video-rental chains not yet bankrupt. You'd think being a video-rental clerk would suit me well, with my somewhat detailed cinematic knowledge. But I overheard some of the young Gen-X guys already working there chatting excitedly about the recent digitally animated HORTON HEARS A WHO, you know, the one with the voice of Jim Carrey. Wanting to show off my knowledge of inventory, I started informing the young managers about how, in the 1950s, Dr. Seuss himself conceived a live-action picture, 100 per cent original, Columbia Pictures - and how it's largely been forgotten since; they ought to stock it, maybe have it next to HORTON as a cool retro-option. O my brothers, they looked at me as though I'd been speaking a strange and unpleasant foreign language, then went back to their business. I knew there and then I'd lost the job opportunity.

The movie that made me too film-geeky even to be employable here in Flyover-Land as a film geek? (and yes, there is a comedy called FILM GEEK about such an individual) It's 1953's cult oddity THE 5,000 FINGERS OF DR. T, directed by Roy Rowland. The not-based-on-a-picture-book Seuss, property, with its playpen production designs and fifties-kids perspective, strikes one as practically the funnier soulmate of William Cameron Menzie's ostensibly science-fictional INVADERS FROM MARS, from the same era.

In the opening of DR. T, Bart Collins (Tommy Rettig) complains directly to the viewer about being ordered by his widowed mother (Mary Healy) to practice piano under stern Dr. Terwilliker (Hans Conreid), creator of the "Ten Happy Fingers" method of music teaching. Tommy calls Terwilliker a "racketeer," a word he's picked up from the visiting household plumber Zabladowski, whom Tommy sees as a replacement father-figure. Zabladowski is played by one Peter Lind Hayes; he and dishy Mary Healy were evidently a husband-and-wife entertainment team of the time.

Falling asleep, Tommy dreams Dr. Terwilliker as a literal criminal, keeping the boy prisoner at an enormous piano in the fortresslike Terwilliker Institute, guarded by an army of weird henchmen (including two "Siamese" twins, inseparably joined at the beard, who go around on roller skates). All these villains sing proudly of how villainous they are. Devoted to the doctrine of the piano as the only worthwhile musical instrument (making him, what, a black-and-white supremacist?), the  doctor has locked all non-pianist musicians in his dungeon and put Mrs. Collins under a hypnotic spell as his cohort and fiancee.

Tommy's only hope in thwarting Terwilliker's plot to enslave 499 other boys with him in this piano-tentiary and make them wear "Ten Happy Fingers" beanies (with little waving hands on top) is to recruit Zabladowski, reappearing in the dream as a plumber with all sorts of handy, evil-fighting tools, including a pocket atom bomb.

Really, how can anyone dislike that? But, though critics and parents' groups were charmed, and the musical score gained an Oscar nomination, THE 5,000 FINGERS OF DR. T wasn't a great commercial success. It really does look like a Seuss picture-book come to life, with fanciful soundstage sets melding perfectly with off-kilter drawn backdrops, colorful landscapes and weird costumes. The big question is how well a Seuss narrative holds up at feature length, compared with TV-special shorts like How the Grinch Stole Christmas. And anyone for that Mike Myers attempt to stretch out THE CAT IN THE HAT to feature-length? This one is certainly padded out with musical numbers and dance routines (the music, though energetic, doesn't have any really catchy tunes, but some of the melodies have since been covered by novelty bands).

But viewers of any age, looking for something oddball, shouldn't be bored once they tune into to the robust comedy performances and satirical-nonsense dialogue. And, as the foppish villain, Hans Conreid sure earns his favored status as the cartoon voiceover behind "Fractured Fairy Tales."

Later I learned that if one ever wants a job, the trick is to drop references to THE BIG LEBOWSKI and just hope against hope the HR agent is a fan of The Dude. I rarely get an interview anymore, so there isn't much chance to test that theory. (3 out of 4 stars)
Posted by Bob Ignizio at 7:06 AM