[STORIES WE TELL opens in Cleveland on Friday May 31st exclusively at the Cedar Lee Theatre.] 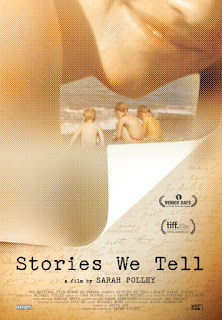 Every family has its secrets. Very few of them make a feature length documentary about them and release it for viewing by the general public. That's what actress/director Sarah Polley has done with STORIES WE TELL, though. You'll probably feel a bit like a voyeur watching as Sarah has all the surviving members of her family and pertinent family friends recount “The Story” about her mother Diane, but like any true voyeur you won't be able to turn your eyes away.

The goal Polley is after here, or at least the one she says she's after, is to show how ever person has their own version of the truth that they tell, and each version has similarities and differences. No one is necessarily lying; we all just remember things differently, and especially with the passage of time our stories can undergo subtle changes from the reality they represent. One of the more important interview subjects, Harry Gulkin, disagrees with the filmmaker. He believes there is a definitive truth that can be told, or at least something close to it, but that only those who were directly involved can and should tell it.

The story in question begins with Diane meeting and falling in love with Sarah's father Michael. The crux, however, is a period of a few months when Diane got a job acting in a play in Montreal, during which she was away from her husband and children. Given the twists and turns this story takes, I hesitate to say much more. Suffice it to say it's never dull, though.

It's fair to say that Polley does achieve her stated goal through the interviews, home movie footage of her family, and skillfully done re-enactments. Less clear is whether or not making this film has enabled the filmmaker to put this story to rest, although one at least gets the sense that she's more at peace with it than she would have been otherwise. Regardless, it certainly feels as if the audience gets enough information to satisfy their curiosity in the matter, and in terms of evaluationg STORIES WE TELL as a success or failure as a film intended to be viewed by an audience, that's the main thing. I'm not sure if I would have put this story out there if it were about my own family, but as an audience member I'm glad Sarah Polley did. 3 out of 4 stars.
Posted by Bob Ignizio at 11:29 PM