[STARBUCK opens in Cleveland on Friday May 31st exclusively at the Capitol Theatre.] 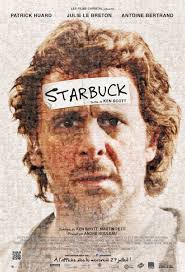 Plenty of words have been expended in the name of films that we enjoy in spite of ourselves – so-called guilty pleasures that are too asinine, too incompetent, too stupid, raunchy, explodey, sappy or predictable to warrant true artistic props… but also calibrated just right to dead-center an individual’s own unique pop cultural preferences. But what about films we enjoy in spite of the films themselves?

My reaction to Canadian comedian and filmmaker Ken Scott’s STARBUCK, while far from a revelation, did make me wonder why I don’t feel this way more often – here we have a blatant feel-good comedy that really wants to evoke warm fuzzies, really doesn’t give a spit about structure and storytelling, and really, actually *urk!* (at least for me) evoked warm fuzzies. GRR!

STARBUCK’s title is the winking AKA of David Wozniak (Patrick Huard), an affable loser who spent several years of his early twenties in a masturbatory stupor at the local sperm bank. The film picks up 13 years later – years for which David has a lot to show: he’s an incompetent delivery boy for his father’s butcher shop, 80,000 dollars in hock to the mob, a reluctant father-to-be alongside pregnant girlfriend, Valérie (Julie LeBreton), and unknowing father-already to 533 test tube miracles, 152 of whom have taken legal action against said local sperm bank in hopes of learning their biological father’s real name.

On paper, it almost looks like a paternity-happy French knock-off of THE BIG LEBOWSKI (Un Grand LeBleau I’d call it), but Starbuck has more heart than The Dude… or, perhaps, not enough weed to dull his neuroses. David doesn’t want to reveal his identity, going as far as hiring his chubby lawyer buddy, Avocat (Antoine Bertrand), to oppose the suit. But he’s curious about his offspring, and, in effort to turn his life around for Valérie’s and their child’s sake, commits himself to becoming anonymous guardian angel to his platoon of progenies.

STARBUCK’s best attributes are its lead and its laissez-faire.  Huard, barrel-chested, unshaven and perpetually swaddled in superhero t-shirts, portrays Starbuck with just enough habitual responsibility and world-weary exhaustion to ensure the character never feels pathetically directionless, but rather adorably direction-lite. The seeming effortlessness of his performance is well-matched to the overall tone of the film, which rejoices in airy, lingering family dinners, soccer games, sun rises and singalongs, gently guiding David to complete, full-fledged adulthood, while treating structure and storytelling as something of an afterthought.

If, for example, you are the type of person who is annoyed when a character or storyline is introduced, only to fulfill her/his/its thematic purpose and be summarily dropped, STARBUCK will annoy you. Look at that synopsis. There’s just so much (it has 152 supporting characters, for Easter Bunny’s sake). So the film makes decisions – not compromises, but clear decisions – on what earns narrative focus and what functions as straight story propellant and character motivation.

In some cases, the strategy works – David’s looming debt and the beefy goons who sporadically appear to deliver hands-on invoices, for instance, never pose a real threat… but I never minded. His money issues are a simple, intermittently addressed plot engine used to paint him into a corner as he attempts to draw a snaking borderline between a misguided past and focused future. The film establishes pretty early on that it isn’t the sort of flick where, at the last minute, the protagonist gets fitted for concrete Keds, so why pretend?

Sometimes, though, the breeziness becomes frustrating, especially in the case of David's relationship with the only sporadically present Valérie, upon which the entire movie is predicated. David commits to changing his life and being more responsible to prove that he’ll be present in their child’s life. His subsequent efforts to better himself by watching over his secret sperm kiddies look great from out in the stadium seating, but it’s hard to forget that any time he spends with them is time he spends away from the pregnant girlfriend he’s trying to convince of his commitment.

Oh, STARBUCK, I just can’t stay mad at you.

At its big, sloppy, rainbow-gushing heart, STARBUCK is all about family: David’s intrepid (if bumbling) commitment to his father’s business, his will to change himself for his new family, and, of course, the 152 half-siblings who come together to find their dad and end up discovering each other – buskers, heroin addicts, lifeguards, first-time actors and last-call drunks. For all the films deficiencies in managing its main characters, it actually does a fantastic job with what might be the hardest bit – giving believable insight through both prolonged peeks and stolen glimpses into the multifarious lives of Starbuck’s innumerable spawn. Plus pop music and laughter and tears.

It made me happy.

And it made me mad. It’s  overlong, narratively WAY overstuffed, a wisp more corny than it would ever let on, and only three-quarters as funny as it thinks. So I reacted emotionally to a subpar film that wasn’t quite bad enough to warrant outright dismissal. There are worse things than enjoying a movie – take, for example, the shame that comes with guilty pleasures. (3 out of 4 Stars)
Posted by Matt Finley at 12:01 AM