Sound City (May 10th at the Cleveland Museum of Art)

[SOUND CITY screens Friday May 10th at 7:00 pm at the Cleveland Museum of Art.] 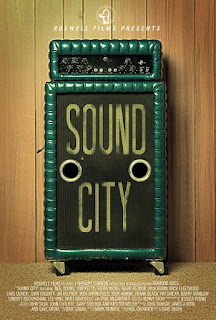 Really there are two separate movies contained in SOUND CITY, the new documentary directed by musician Dave Grohl (Foo Fighters, Nirvana). The first part of the film details how the Sound City Studio began in 1969 and eventually rose to prominence after Fleetwood Mac's breakthrough 1975 self titled album was recorded there. Plenty of other big names utilized the space, many drawn by the prospect of utilizing the studio's Neve mixing board. Even Grohl kind of goes blank when Rupert Neve, the engineer responsible for the board, tries to explain how it works. Suffice it to say, though, that it gave the music recorded at Sound City Studios a distinctive sound.

During this first half of the film, Grohl interviews the surviving studio owners and employees as well as numerous musicians who recorded there. That means plenty of good stories from the likes of Stevie Nicks, Rick Springfield, Vinnie Appice (Dio), Tom Petty, Neil Young, Barry Manilow, Lee Ving (Fear), Stephen Pearcy (Ratt), and many more. Eventually digital recording techniques threatened to make the defiantly analog Sound City obsolete, but when Grohl's band Nirvana recorded their 'Nevermind' album there, it spurred a whole new round of bands to seek the space out.

The second half of the film revolves around Grohl's purchase of the Neve mixing board. This allowed Grohl to assemble a veritable who's who of rock n roll royalty to jam with him and record the results using the same board and techniques that spawned so many classic albums at Sound City. Lots of good stuff results, but Rick Springfield and Stevie Nicks in particular benefit from collaborating with Grohl and the rest of the Foo Fighters, each producing songs that are easily the best thing they've done in years. Yeah, it's a bit self aggrandizing and lightweight, but it's also pretty damn entertaining. If more vanity projects were this good, they might not have such a bad name. 3 out of 4 stars.
Posted by Bob Ignizio at 12:00 AM