Repost: In Another Country (May 15th at the Cleveland Museum of Art) 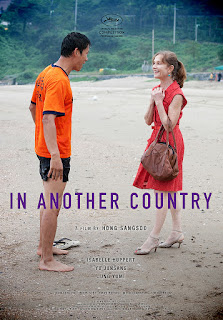 I suppose you could call IN ANOTHER COUNTRY an anthology film, but it feels more like an artistic exercise. In a framing sequence, a young Korean woman tries to take her mind off her family's financial problems by writing short stories. Each story involves a French woman named Anne (Isabelle Huppert) visiting South Korea. In each story, there is some element of marital infidelity with Huppert being a disinterested object of desire in the first segment, a cheating wife in the second, and finally a woman whose husband has left her for a Korean girl in the final tale. Jong-soo (Kwon Hae-hyo) is alternately a rebuffed suitor, the man Anne is cheating on, and then back again. Yoo Jun-sang provides comic relief as a dim witted lifeguard in each segment. Various plot points and lines of dialogue recur in each story.

The acting is first rate and the film is very well made. There is some fine imagery, and as a fan of sixties and seventies cinema I can't help but love the hard camera zooms. Still, IN ANOTHER COUNTRY feels more than a bit sterile and contrived. Taken as a whole, it's the kind of thing that one can understand appealing to a filmmaker as a way of stretching his or her talents, but as a work intended for public consumption I'm not sure it really works. It certainly didn't do much for me. There is a nice undercurrent of light humor, and no doubt some will find the film interesting on an intellectual or artistic level. On any kind of deeper emotional level, however, it fails to connect. Writer/director Hong Sangsoo is clearly a talented guy, but perhaps a little too self absorbed for his own good. 2 1/2 out of 4 stars.
Posted by Bob Ignizio at 12:00 AM