[RENOIR opens in Cleveland on Friday May 24th exclusively at the Cedar Lee Theatre.] 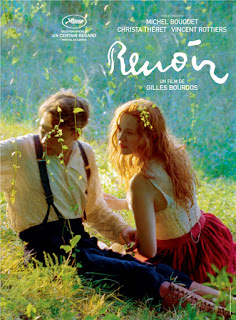 In mythology, the muses were goddesses thought to inspire literature, the arts, and science. In real life, muses tend to be somewhat more earthly objects of desire who nonetheless evoke creativity in those smitten by them. Picasso had Marie-Therese Walter, Roger Vadim had Brigitte Bardot, and apparently everyone from George Harrison to Eric Clapton to Mick Jagger found inspiration from Pattie Boyd.

The muse we encounter in RENOIR is Andree Heuschling (Christa Theret), a curvaceous redhead with artistic aspirations of her own. In the meantime she works a model for renowned impressionist painter Auguste Renoir (Michel Bouquet). Although in poor health, the venerable artist is so moved by Andree as to find within himself the passion for one final great creative burst.

Renoir's middle son Jean (Vincent Rottiers) is also affected by the presence of his father's model. As he begins tentative romance with Andree, the previously directionless young man starts bringing his life into focus. His primary purpose is to cement his relationship with the girl, but the path towards becoming a filmmaker that sends him down will ultimately prove every bit as important, if not moreso.

The story RENOIR tells is an interesting historical footnote, but it's also pretty lightweight material to be stretched out to nearly 2 hours. One could easily make the argument that the time could be better spent perusing reproductions of Auguste's art or watching one of Jean's classic films like RULES OF THE GAME. Still, if one is willing to let the the film wash over them like a lazy summer day – hot, languid, and sensual – it is by no means an unpleasant experience. 2 1/2 out of 4 stars.
Posted by Bob Ignizio at 12:05 AM