[NO PLACE ON EARTH opens in Cleveland on Friday May 3rd exclusively at the Cedar Lee Theatre.] 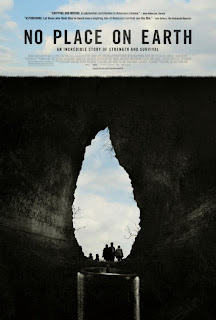 “I forgot that there was a sun” are the poignant words of a woman recalling the day in her childhood when she emerged from a Ukrainian cave, where she and her family hid from the Nazis for a year and a half. She recounts her experience in the extraordinary documentary NO PLACE ON EARTH.

Janet Tobias' film tells the remarkable true story of five Jewish families who took shelter in the dark caves of the Ukraine to elude certain death during World War II. Thirty-eight men, women and children improvised an underground life between 1942 and 1944, scarcely seeing the light of day except when the men ventured outside, at great peril, to gather food. Theirs was the longest uninterrupted underground survival in recorded history.

For more than six decades, the story was not known by anyone except the survivors. In 1993, Chris Nocola, a cave explorer from New York, traveled to Ukraine to research the history of his Eastern Orthodox family. Investigating the country's 77-mile cave system, he stumbled upon a forgotten piece of 20th-century history. “Every cave I enter has a secret,” Nicola says. The secret of a particular cave, known as Priest's Grotto, was suggested by objects Nocola found: buttons, stoves, earthen tables and chairs, a fragment of a leather shoe. There were names written on the cave's ceilings and walls, signs of human life.

Nocola was intrigued but could not find any information about who might have lived in the caves. “Maybe some Jews,” suggested a resident of the nearby town. The mystery remained unsolved until some years later, when Nocola learned that the son of one of the men who survived the cave lived less than seven miles away from him. Members of the surviving families told a story so incredible it resembles the most outlandish fiction. “I went looking for my family's story and found someone else's,” Nocola says. He organized a highly emotional return trip for the survivors – one of whom was in his 80s and another a robust 91 – to reenter the dark Priest's Grotto that, against impossible odds, kept them safe and alive. “We were fighters,” said one survivor. “We were masters of our own fate.”

The film skillfully re-creates the families' wartime experiences, with painstaking attention to atmospheric and historical detail and an emotionally moving score by John Piscitello. As the storm clouds of war gathered in their native Ukraine, the families searched for a place to hide to avoid being shot or sent to concentration camps. They were endangered not only by the Germans but also by the collaborating Ukrainian authorities. The Jewish families took refuge in their first cave, where they improvised an existence until the Nazis found them and shot their way into the cave. People were rounded up and marched off, though a few managed to escape in the darkness and chaos. The others were imprisoned by the Ukrainian police, who offered them a deal: in exchange for some silver and gold, they would be allowed to escape. The outcome of that deal is the film's most horrifying sequence.

The remaining men, women and children managed to find a new, deeper and less commodious cave, where they managed, through grit, mechanical ingenuity and sheer physical strength, to forge a life. Food was scarce, the men leaving the cave to forage for provisions while the women waited in worried silence for their return. They ate only enough to survive and, covered by perpetual darkness, slept 18 hours a day. They kept track of the time and observed the Jewish holidays. They made their own flour, using a stolen grinding wheel. Two of the men built a sleigh on which they hauled grain across the snow. Tensions grew, as they did among the hiding families in The Diary of Anne Frank. There were fistfights and arguments. A boy whose family had been murdered comforted himself by eating the families' flour, and was beaten for it.

In total, the families lived for 468 days before learning, via a note in a bottle lowered into their cave, that it was at last safe to come out. Joyful and free at last, the survivors eventually emigrated to the U.S. and Canada.

On returning to the cave 67 years later, the survivors found a familiar comfort in its darkness, which had become a friend in their time of danger. One elderly survivor, visibly moved, said he wanted say “thank you” to the cave. 4 out of 4 stars.