My Amityville Horror (now on Video On Demand)

[MY AMITYVILLE HORROR is now available on Video On Demand.] 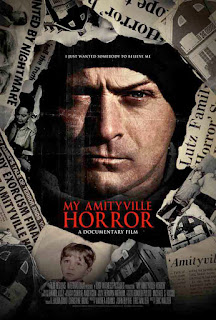 From a fairly early age I was interested in all things spooky and paranormal. That being the case, growing up in the seventies there was no way I wouldn't have been fascinated by the purported supernatural goings-on that beset the Lutz family in late 1975. The incident became commonly known as “The Amityville Horror” and spawned a 1977 book by Jay Anson. However, it was the film adaptation released in 1979 that served as my introduction to the supposed sinister events. It's not a particularly good film, but it worked for me when I was a kid. The parade of mostly awful sequels and remakes that followed, less so. Notheless when I heard there was yet another film about Amityville, this one is a documentary, my interest was piqued.

MY AMITYVILLE HORROR focuses the Lutz family's middle child Danny who was 9 years old at the time the incidents supposedly took place. The now middle aged Daniel claims he doesn't want to be associated with the story that made him famous, but that seems a little odd given that he's not just in this film, he pretty much is the film. Laura Didio, a reporter who covered the case when it happened and was responsible for bringing well known (and dubious) paranormal “experts” Ed and Lorraine Warren into the mix, is also on hand to offer her opinions and talk about the case a little with Daniel. But for the most part, the movie is just Daniel telling his side of the story, which ends up being as much if not more about his clashes with stepfather George Lutz as it is about anything otherworldly.

Although MY AMITYVILLE HORROR takes no firm position one way or the other as to whether anything paranormal actually took place, in general everyone interviewed acts as if something supernatural happened; they just aren't sure that's the whole story. The general theory of those (other than Daniel) we see in the film, and more or less of the film itself, is that family dynamics already in place may have had everyone already so on edge that the perceived intensity of supernatural occurrences was greater than anything that actually happened.

Of course there are those who would dispute that anything otherworldly was going on in the Amityville Horror case, and it's a shame there isn't a stronger skeptical voice on hand to represent that point of view. For that matter, it's a shame there isn't anyone on the pro-paranormal side who can make a better defense of that position than we see here. Still, MY AMITYVILLE HORROR is not without interest, especially for aficionados of the case. One just can't help wishing there was more of substance here.

Rather than a thorough examination of the case, or even the claims of its primary subject, what the film goes for is essentially a character Daniel Lutz, a man who has clearly had a rough life and who bears some fairly deep psychological and mental scars. He may indeed sincerely believe something supernatural happened to him, but the real damage seems to have been inflicted not by evil spirits, but by a harsh stepfather and the media circus surrounding the “Horror” that young Danny was swept up in whether he wanted to be or not. 2 1/2 out of 4 stars.
Posted by Bob Ignizio at 12:00 AM