M (May 30th at the Capitol Theatre)

[M screens Thursday May 30th at 7:00 pm at the Capitol Theatre in association with The Cleveland Cinematheque.] 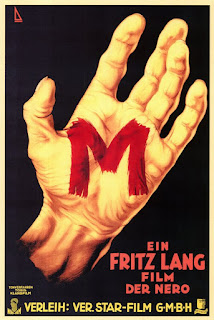 Child killer Hans Beckert (Peter Lorre) walks the streets of Berlin in the early thirties whistling “The Hall of the Mountain King” and spreading terror among the populace. Inspector Lohmann (Otto Wernicke) heads up the police response, but the forces of law and order aren't alone in wanting Beckert caught. The murder spree and resulting police manhunt have become disruptive to the criminal underworld, so "The Safecracker" (Gustaf Gründgens) brings together the town's lawbreakers and beggars to mount a manhunt of their own.

Director/co-writer Fritz Lang is one of those guys who gives lie to the notion that old films feel dated. M may be 80 years old, but Lang's visual style still feels fresh to this day. And certainly the morbid subject matter he explores here continues to strike a chord in audiences as the seemingly endless stream of serial killer films both big and small can attest. Lang's murderous protagonist is no fiendishly likable antihero like Hannibal Lecter or Jigsaw, though. Lorre plays Beckert as a pathetic figure seemingly driven by desires he can't control, and he's all the creepier for it. And of course the idea of having both cops and criminals chasing after Beckert is still brilliant, and though it has been copied, it's surprising it hasn't been copied more.

About the only thing that feels old fashioned about M is the closing plea from one of its characters. A not uncommon device in social issue movies at the time, it was obviously intended to drive home Lang's themes of parental responsibility. Seeing as that message comes through clearly enough in the rest of the film, the moment feels a bit heavy-handed. It's a pretty small quibble, though, and it certainly doesn't diminish the film's status as one of Lang's masterpieces. 4 out of 4 stars.
Posted by Bob Ignizio at 8:22 PM